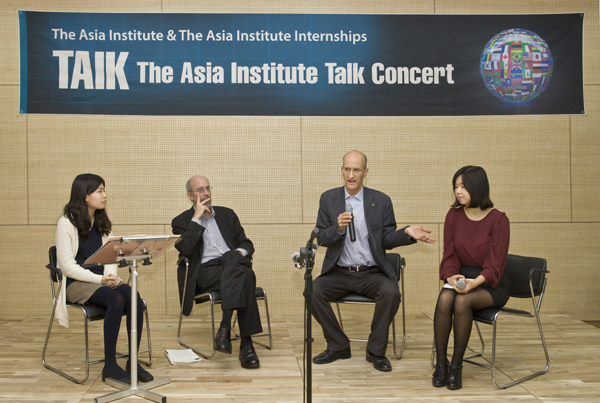 Emanuel Pastreich, second from right, speaks during “Climate Change and the Future of East Asia: First Steps Towards a New Civilization,” an open environmental discussion on Thursday in Jung District, central Seoul. Second from left is John Feffer, a senior associate at the Asia Institute.

A discussion on climate change and human civilization in East Asia was organized by the Asia Institute on Thursday in Jung District, central Seoul, and members from the Seoul community and two prominent key speakers were invited to share their thoughts on the environmental crisis and how it should be addressed.

The discussion titled “Climate Change and the Future of East Asia: First Steps Towards a New Civilization,” in which the panel and the audience freely exchanged opinions, was led by two guest speakers from the Asia Institute: Emanuel Pastreich and John Feffer.

Pastreich, 50, who founded the institute in 2007, is currently an associate professor of international studies at Kyung Hee University in Dongdaemun District, eastern Seoul.

Between 2009 and 2011, he worked for the Daejeon city government as a committee member for foreign investment and city administration.

Feffer is a senior associate at the Asia Institute and co-director of Foreign Policy in Focus at the Institute for Policy Studies, a progressive multi-issue think tank based in Washington, D.C. He was also a former associate editor at the World Policy Journal.

Feffer opened the discussion floor by referring to a U.S. Defense Department report released on Oct. 13 that discussed the immediate threats of climate change and how it poses a threat to U.S. national security.

Feffer highlighted the timing of the report, in particular, which came just a few weeks before the U.S. midterm elections on Tuesday, and stated that he firmly believes the Pentagon thought “climate change is the most important issue in the Pentagon, and we don’t care what happens in the elections.”

When the floor was open to Pastreich, he focused more on the aspects of global warming that would impact civilization and how the issue must be dealt with through the mindsets of global citizens.

“Climate [change] is not a problem of technology or fossil fuel,” he said. “It’s a spiritual problem and it’s a cultural one … in terms of what our habits are.”

During the free discussion session, a man from the audience who introduced himself as a professor at Seoul National University said his son was born in 2006 and has a life expectancy of 100 years. However, he continued, if his son really survives that long, it would probably be due to advanced technology.

“It’s not about behavioral or cultural change, but technological advancement,” he said, referring to climate change solutions. “That’s why we have to be dependent on technology,” he added.

“There’s always a risk,” Pastreich said in response. “When nuclear power started decades ago, people thought the problems [derived from that source of energy] would be solved through technology.

“Technology has tremendous potential, but it hasn’t solved all our problems yet,” he added.

A junior-year student from the Daewon Foreign Language High School, who introduced himself as Henry, raised his hand and recalled his youth in California.

“When I was living in California, people usually came to our school and explained how we should perceive climate change or environmental degradation,” he said. “But in Korea, I don’t know if we’re doing this well because Koreans just leave their trash on the street.”

Kwon Byong-hyon, a former ambassador to China who is the chairman of Future Forest, a green non-governmental organization, answered: “I think it depends more on the generation, rather than on the country or region. The reason why the younger generation is more sensitive than the older generation is because you are the victims of all environmental deteriorations.”

“That’s why I have very high hopes for the younger generation to become aware of the real situation,” Kwon added, “and come to the awareness of action.”