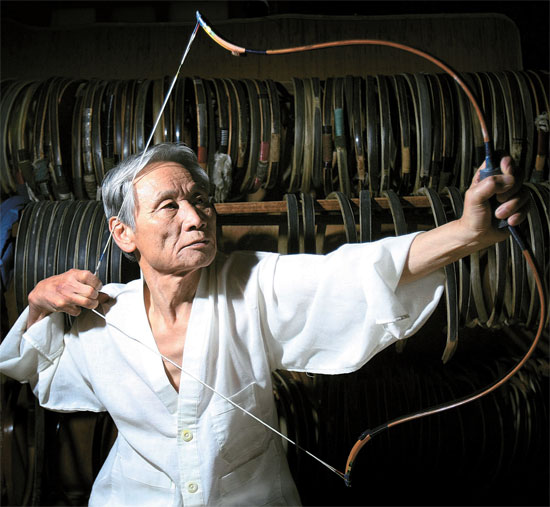 Kwon Yeong-hak draws his bow in his workshop in Yecheon County, North Gyeongsang. By Gong Jeong-sik


When Kwon Yeong-hak was nearing 30, he inherited the family business making bows at his family’s workshop in Yecheon County, North Gyeongsang.

But he had other plans in mind and wanted to take it a step further to establish an archery team in his community.

Athlete Kim Jin-ho was crowned in five categories in the 1979 World Archery Championships in Berlin when she was a senior at Yecheon Girls’ High School.

But in a country where ssireum, or Korean wrestling, was so popular, such an acknowledgement was unfamiliar. Still, it meant residents had a new sport to tune into.

And most recently, Yun Ok-hee won a bronze in women’s individual, and a gold in women’s team during the 2008 Summer Olympics in Beijing.

All three athletes were affiliated with Yecheon County Office, and today, this small region has risen to become a Korean archery hub, a status many local archers largely attribute to Kwon, now 71.

A JoongAng Ilbo reporter visited Kwon’s house in Yecheon County on Oct. 13, ahead of the 2014 Yecheon World Archery Festival, which ran from Oct. 15 to 19.

Kwon was appointed as an honorary adviser for the bew event, which was launched this year, offering advice on how to coordinate it.

As the reporter walked into Kwon’s home, an overwhelming amount of plaques and trophies clustered on one side of the room was eye-catching enough to make him stop for a closer look.

Of the numerous honors praising his talents, “Korea’s prestigious bowman,” a title bestowed on him by the Korea National Archery Association in 1979, was especially intriguing.

A walk up to the second floor, where Kwon’s workshop is located, was all the more breathtaking, and about 70 magnificent bows, all in various shapes and sizes, were hung across the room. The handmade works of art are made with materials like water buffalo horn and mulberry wood.

Kwon, who made sure to mention that they were all works in progress, added that each takes about seven to 10 months to complete and contains more than 300 elaborate touches.

When the photojournalist requested he pose for a portrait, Kwon was strong and patient enough to draw his bow nearly 20 times.

“I now use the bow to train my mind and body,” he said, a process that requires him to “become one” with the bow and target.