Lotte mall has another safety check

Lotte mall has another safety check 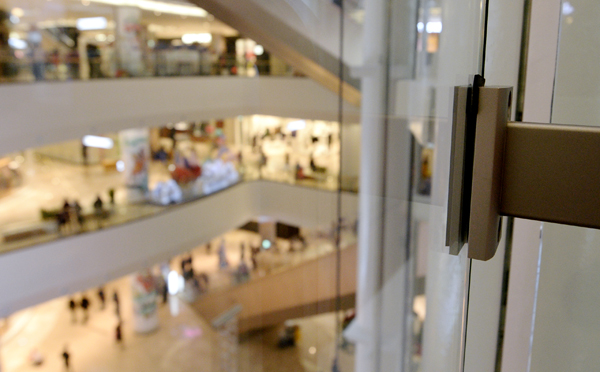 A metal component from the third floor of Lotte World that fell and injured a worker on Thursday. [NEWS1]

The Seoul Metropolitan Government yesterday conducted another safety inspection on the newly opened Lotte World Mall complex, also known as the Second Lotte World, after a series of incidents raised concerns among visitors.

The inspection, the results of which were not disclosed as of press time yesterday, follows an accident on Wednesday - a day before the mall’s early opening - that involved a 46-year-old employee of Lotte’s subcontractor. The man was cut by a piece of metal the size of a credit card that fell from the third floor. His injuries were not serious, however, and he was taken to a nearby hospital, where he received two stitches on his forehead.

The metal component was reportedly attached to a glass banister on the third floor and dropped to the ground after it was accidentally detached by the cleaning staff. There are reportedly dozens of similar parts in the building.

The elevator from the first to the fifth floor is located directly in the middle of the Lotte World Mall building, with the surrounding area open, which could raise the risk of accidents.

Worries over the complex have only grown since cracks were found earlier this week on the fifth floor of the second Lotte World. Lotte Corporation, which operates the complex, explained on Monday that the cracks on the floor were supposedly made while curing the cement and that they would not affect the building’s stability.

Later, it added that the cracks were intentional, and in line with the building’s decor.

The municipal government carried out a safety inspection on Monday and provisionally concluded that Lotte’s explanation was correct and that the cracks would not undermine the stability of the building. However, an official said the local government would conduct an in-depth inspection.

But while the operator claimed the cracks were intentional, media reports on Thursday stated that the cracks on the fifth floor were already covered with cement and large pots, making Lotte’s explanation less convincing.

The mall was plagued by a number of safety issues before its early opening, increasing hesitation among potential visitors.

“I see the tower under construction every day from the other side of the Han River,” said Ahn Su-mi, 27, a student who lives in Wangsimni, eastern Seoul. “But I still don’t want to go to that area because Lotte has never clearly explained the controversies surrounding the complex.”

The city government made it clear that the complex could be shut down if an accident were to occur from negligence or Lotte failed to come up with appropriate safety measures for the construction site or traffic control.