October exports at a record high

October exports at a record high 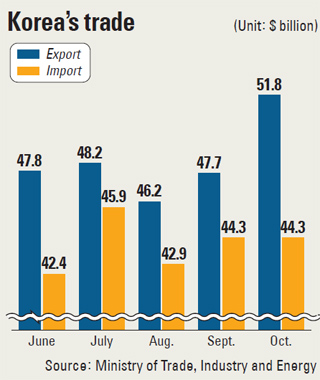 Exports last month reached a record high, thanks largely to an increase in orders from the United States, where businesses have been stockpiling goods ahead of Thanksgiving and Christmas. Due to retreating imports, the country’s trade surplus also was a record.

Despite the welcome news, there are growing concerns over whether exports, which have been one of the key factors in keeping the nation’s economy from contracting, can continue their current momentum.

According to the Ministry of Trade, Industry and Energy, exports in October grew 2.5 percent year-on-year to $51.8 billion, breaking the record of $50.4 billion set in October 2013.

It was the third time monthly exports exceeded $50 billion. The other time was in April, when they were $50.3 billion.

Meanwhile, imports last month fell 3 percent from a year ago to $44.3 billion, opushing the trade surplus to a record $7.5 billion.

Growth in exports was largely attributed to the recovering U.S. market. Exports to the United States jumped 25 percent, followed by the Middle East at 9 percent. Exports to China, the largest market for Korean goods, rose 3.7 percent, the second straight monthly increase.

Exports to Europe, where both Germany and France have been struggling with slower growth, shrank 8.6 percent. Exports to Japan retreated 1.4 percent.

But both mobile communication devices and automobiles, which have been the leading export items in recent years, retreated.

Key products, especially smartphones, have been losing their appeal in global markets. Korean smartphone makers have faced stiff competition from Apple, which recently released devices with larger screens, as well as Chinese smartphone vendors, who are offering affordable entry-level models.

The government was confident the nation’s export performance will easily reach new heights by the end of the year.

“Although there have been several negative factors, such as the prolonged economic recovery in Europe and Japan and cutbacks in working hours, if the current momentum continues, exports could easily surpass $1 trillion by the end of this year,” said an official at the trade ministry.

Cumulative exports for the first 10 months of this year stand at $477.3 billion.

However, will the current momentum continue? Recent lukewarm growth in China has become one of the biggest concerns for major exporters and the quantitative easing movement by the Japanese central bank has once again threatened Korea’s exports.

Ji Man-soo, a researcher at the Korea Institute of Finance, in a report released yesterday warned that Korean exporters could suffer from the decelerating growth in China combined with intensifying competition from Japan.

The researcher noted that export growth to China between May and August has declined. And in the first nine months, Korean exports to China dipped 0.7 percent compared to the same period last year.

The researcher said this is a stark contrast to the overall 2.9 percent increase in Korean exports during the same period.

Average annual growth of Korean goods exported to China between 2001 and 2013 was 18.3 percent.

The researcher pointed out the main reason for shrinking Korean exports to China was the decelerating Chinese economy, which has fallen to the neighborhood of 7 percent growth.

China’s economy in the third quarter posted a five-year low of 7.3 percent growth. Under such circumstances, market analysts doubt whether the Chinese economy can reachits 7.5 percent target for this year. Some Chinese think tanks have scaled back their outlook to 7.3 percent.

Meanwhile, the Japanese central bank surprised the global market on Halloween when it announced it would increase its asset purchases from an annual 60 trillion to 70 trillion yen to 80 trillion yen. The move comes at a time when the Japanese economy is under threat of losing steam after Prime Minister Shinzo Abe’s fiscal fight against deflation and economic stagnation.

Although the move was seen as a positive development in the global market, it raises concerns among Korean exporters since many of their products overlap with Japanese goods.

Therefore, a weaker Japanese yen will only erode the competitiveness of Korean products.