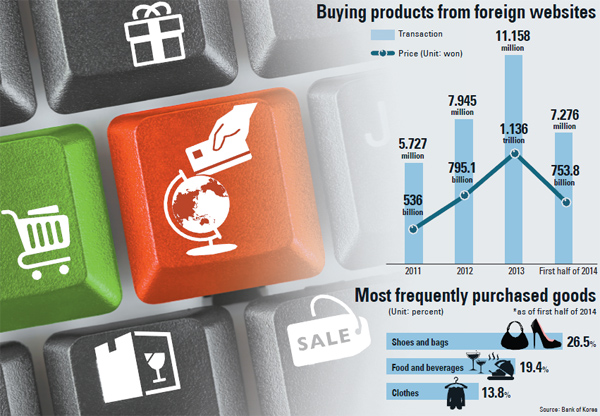 But this was no random shopping spree. The company’s CEO Wi Sung-ho asked the department leaders to make a purchase, then share their thoughts on the experience in a group chat. As the employees bought and received their products, they had mostly positive comments for the message board.

“The process was simpler than I thought it would be,” said one branch head, and another added, “I was really surprised as the price was very cheap.”

“About five or six of the 126 had experience buying things directly from foreign websites, but most who experienced it [for the first time] had a good opinion about it,” said Wi, who said he often buys health products from abroad. “Jikgu will become an unavoidable trend,” the CEO added, using a shortened term for directly purchasing something from a foreign site.

Credit card companies have begun to look into ways to be more jikgu-friendly to customers. Many are promoting products or services, such as shipping discounts and interest-free installments, to lure overseas online shoppers. For the card industry, which has been in a slump since a spate of personal information leaks earlier this year, this group of customers could help induce a business revival.

Some companies have come up with credit cards to be used exclusively for purchasing goods from foreign websites, such as the Malltail Shinhan Card Shine and Hana SK’s Viva G Platinum card.

Shinhan collaborated on its credit card with Malltail, a shipper that specializes in products sent to Korea from abroad, and gives shipping fee discounts ranging from 5,000 won to 15,000 won.

Hana SK’s new card provides cash back services, returns 1.5 percent of the payment for any foreign goods, and deducts 0.5 percent of the commission fee that is charged from using foreign services.

Lotte Veex Platinum Card and Samsung Card 3 give a higher percentage of membership points for transactions abroad. Compared to the 1 percent return in points in Korea, they give 1.5 percent and 2 percent, respectively, for purchases from websites in other countries.

Meanwhile, some card companies have started holding events during certain times of the year when people make the most direct purchases.

The biggest shopping season in the United States just started with Halloween on Friday, which will be followed by Black Friday on Nov. 28, Cyber Monday on Dec. 1 and Christmas. Hyundai Card users can get $15 back on a purchase of more than $50 when they sign up for Ebates, an online shopping website, before Nov. 16. Users who join an online event will also get a $10 discount coupon on shipping.

KB Kookmin Card is holding a cash back holiday season event in which users get back up to 50,000 won.

Hana SK Card and Korea Exchange Bank Card are offering a discount of up to 5 percent (30,000 won) when customers make purchases at 20 designated online stores including Amazon, Walmart, Expedia, Agoda and Hotels.com. The two companies are also giving a one-time 3,000 won shipping discount.

The first 4,000 people who buy goods worth more than $80 from iHerb using an American Express Samsung Card before Nov. 9 will get a 10,000 won discount.

Purchases from foreign websites have been rising steadily since 2010. The total amount spent on overseas shopping surpassed 1 trillion won for the first time last year. In the first half of this year, the amount was 753.8 billion won, a 48.5 percent increase over the same period last year.

“The amount spent on direct purchasing of foreign goods is minuscule, taking up 0.2 percent of private consumption, but the percentage will constantly rise,” said a Bank of Korea official. The average price of a direct purchase item is 104,000 won and the most popular items are shoes, clothing and food.