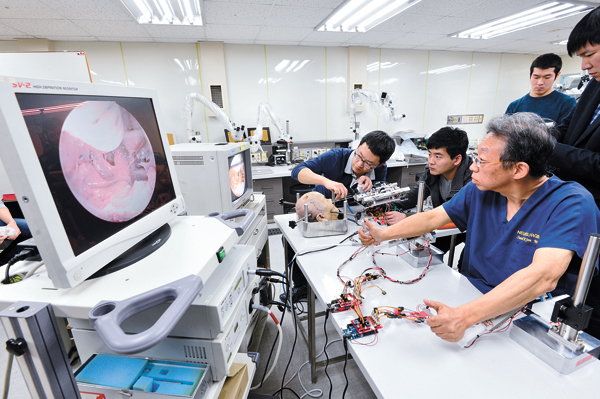 As a doctor operates a knob with his thumb and index finger, a robot that fits on an A4 piece of paper slowly inserts a long tube into a person’s nose. The doctor looks at a screen on the robot which relays images from inside, then uses forceps attached to the tube to reach a blob-like brain tumor growing near the pituitary gland and carefully cuts the tumor out.

The small surgical robot, jointly developed by a bionics research team at the state-run Korea Institute of Science and Technology (Kist) and Yonsei University Medical School, was the star of a the brain surgery demonstration yesterday at Yonsei Severance Hospital in northwestern Seoul. It was the second time the robot had been used in an experiment on a donated human body.

“This small surgical robot can be used in a wide variety of surgeries on body parts that require sophisticated procedures, such as brains, shoulder joints and eyeballs,” said Kang Sung-chul, a computer-assisted surgical system researcher at Kist’s Center for Bionics.

Kist’s robot is an active cannula device, which refers to the motor-powered tube that moves in the direction the doctor chooses. The robot’s tube is about 4 millimeters in diameter (0.15 inch) and can go into a human body without doing any damage to delicate tissue. The tube is thinner than that of the famous da Vinci surgical robot, which has a diameter of 8 millimeters, but the forceps are equally as strong. They can clip off a tumor with the strength to lift 500 grams.

The robot cannot hold any other surgical instruments yet, but it will soon be developed to hold tools such as scissors and small heated pieces of iron used for cauterizing.

The Kist robot is one of the world’s first micro surgical robots. Many research teams, including a United Kingdom-based robotics team at Imperial College of London, are also in the process of developing a similar medical robot.

The Korean research firm still must complete tests on live animals as well as three stages of clinical tests on 100 patients before the robot can begin to be commercialized. The team expects the micro surgical robot will be ready within the next decade.

The Kist team said that it hopes its new creation will eventually allow smaller hospitals access to a surgical robots. Most health care facilities can’t afford a da Vinci robot, which costs about 2.5 billion won ($2.34 million) and is much larger than the one being developed by Kist.

“As much as the compact size, we hope to commercialize this robot for less than 10 percent the price of the da Vinci,” said Lee Woo-seob, another researcher for Kist. “In Korea, only a few large hospitals have access to surgical robots. We wanted to develop a portable, affordable robot that can really be universalized.”