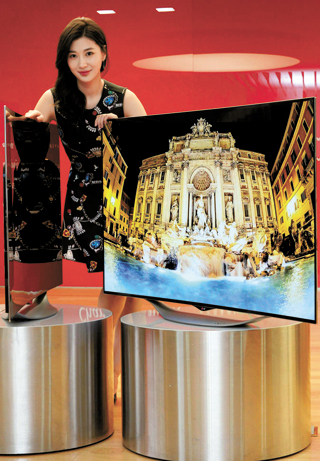 LG’s 55-inch curved OLED TV retailed for 15 million won last year. Today it can be bought for 3.99 million won. Provided by the company

According to LG, sales since the price cut have skyrocketed twentyfold compared to last year.

This is the first time the company has revealed sales data for its 55-inch curved OLED TV.

LG Electronics recently has been aggressively promoting the curved OLED TV to counter shrinking profits from its TV business.

“No matter how good the product’s quality is, it won’t do well unless it is at a competitive price point that customers can accept,” said Ha Hyun-hwoi, the company’s CEO for home entertainment, at an August press conference.

Meanwhile, market research company Display Search estimated that last year 5,000 units of OLED TV were shipped in the global market. That figure is expected to reach 100,000 units by the end of this year and further expand to 4 million units in 2017.