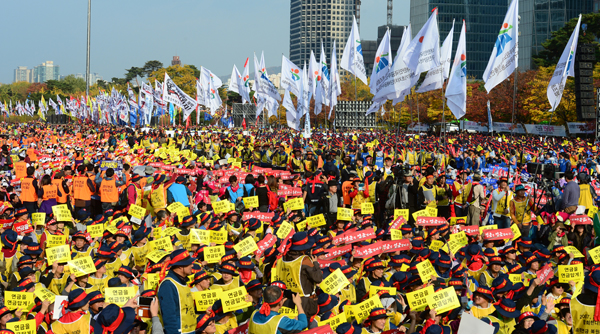 Unionized public workers hold signs in protest of the government’s plan to slash their pension benefits in a massive rally held Saturday afternoon in Yeouido Park, western Seoul. An organizer estimated that 120,000 public servants took part in the demonstration. [NEWS1]

Unionized public workers angered by the government’s plan to scale down their pension benefits held a large rally on Saturday, displaying opposition to the state’s drive to reform a system that uses taxpayers’ money to keep it afloat.

At Yeouido Park in western Seoul, 120,000 public servants - a number estimated by a rally organizer - from 50 government unions protested against the government’s plan to dramatically reduce the scope of the benefits they will receive when they retire. The police put the number of protestors at 90,000.

“In developed countries, [officials] always prioritize reaching social consensus on the pension overhaul [before the announcement of the actual plan],” said Kim Young-hwan, a co-director of the public pension joint countermeasure team at the Federation of Korea Trade Unions.

Kim claimed that the government “unilaterally” pushed for the reform without consulting those who will be affected, calling it a “behind-the-scenes discussion.”

The protest on Saturday was the first collective action civil servants organized against the government’s ambitious drive to fix the public workers’ money-losing pension system. It came five days after the ruling Saenuri Party unveiled its plan on Monday to reform the controversial pension program, which is projected to need more than 50 trillion won ($46.56 billion) in taxpayers’ money to cover the losses it is likely to incur over the next 10 years.

In sync with the government’s move, the Saenuri proposed delaying the eligibility age for government pensions to 65 by 2031. And while those currently working in government offices will have to increase their contributions under the Saenuri’s plan, bureaucrats entering the system from 2016 will only pay 4.5 percent of their income - just like workers in the private sector who contribute to the National Pension System - but their benefits will not be as generous.

An official from the governing party said, speaking on the condition of anonymity, that Saenuri Chairman Kim Moo-sung will soon meet with the head of the government workers’ union to listen to their demands. It is unclear whether or not he intends to make adjustments to the unveiled plan after the meeting.

Reining in the civil-servant pension plan has become a hot potato in the political sphere amid rising public sentiment that retired government workers get overly lavish pension benefits. But public workers argue that their benefits are compensation for salaries much lower than in the private sector, a claim echoed during Saturday’s rally.

“Pension benefits for government workers entail a compensation for meager salaries put up by civic servants,” said a protestor surnamed Koh, a 28-year-old schoolteacher, during the demonstration.

Rep. Lee Hahn-koo, who heads the party’s task force on the bill, scoffed at such claims Monday when he announced the reform plan, saying “No private company in the country offers as much job security to their workers as the public sector does.”