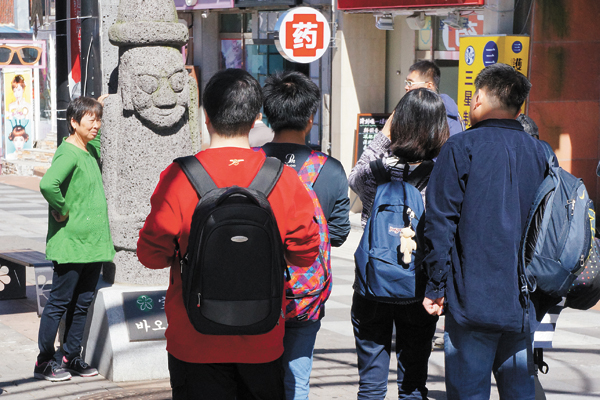 
JEJU - More Chinese entrepreneurs are eyeing increasing investment opportunities here, with their interest in Jeju Island real estate spreading from land halfway up Mount Halla to lodging facilities and apartments in the central part of the island.

One Chinese man from the Jiangsu Province bought a seven-story motel in late August in Yeon-dong, located near a district by Jeju International Airport that is popular among Chinese tourists. The area, known as Baozen, is often compared to Myeong-dong, the bustling neighborhood in central Seoul filled with shops and retail outlets.

He also acquired a pension, a type of guesthouse or boarding house, in nearby Yongdam-dong, with both ventures Chinese-run.

A motel near his is also owned by a Chinese proprietor, and a few residential buildings in the area have recently been purchased by other investors from mainland China. 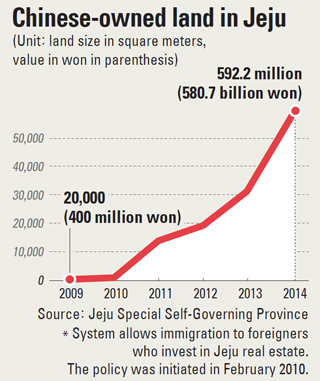 “Chinese investment this year has been concentrated on the new town area in upper Jeju Island,” said Kim Tae-il, an architecture professor at Jeju National University who has worked to document real estate purchases by the Chinese on the island.

Real estate in Jeju is particularly appealing to Chinese entrepreneurs because they can directly cater to Chinese tourists, whose numbers have rapidly been increasing in recent years, particularly to the island.

The Baozen district takes its name from the eponymous Chinese company that once sent 10,000 of its employees on a trip to the island - the single largest group of tourists to Korea.

“Tourists who visited Jeju Island this year totaled 2.5 million,” said Shin Ae-bok, who heads the association of shop owners in the district. “If tourists flock only to stores run by the Chinese, Korean business owners will be hit hard.”

The opportunity to establish permanent residency on the island is also a motivating force behind the Chinese purchasing spree. The Jeju provincial government authorized an exclusive policy in February 2010 that would allow anyone who invests in real estate worth 500 million won ($473,350) or more to be issued an F-2 visa, which allows holders to reside in Korea.

If the investor retains the purchased real estate for the next five years, he or she will be granted permanent residency.

The arrangement has since attracted 960 billion won in real estate investment by foreigners as of last August, and 783 foreign investors have acquired permanent residency.

Of those with permanent residency, 98 percent are Chinese, according to the Jeju provincial government. Before the policy came into effect, Chinese proprietors cumulatively owned 20,000 square meters (23,919 square yards) of real estate in 2009.

Since then, that figure has grown nearly 300 times to 5.29 million square meters as of late June.

However, despite its success, the system has raised concerns over sprawling development. Chinese companies have been buying up cheaper land halfway up Mount Halla - which is cheaper than seashore plots - and building vast resort complexes.

The condominiums, costing more than 500 million won each, will appeal to those Chinese who aim to gain permanent residency.

The cumulative area on Mount Halla where the Chinese are building resorts is close to 3 million square meters now, which is close to the size of Yeouido, in southwestern Seoul, at 2.9 million square meters. Tens of thousands of trees are expected to be cut down to make way for development, which has led to worries over the pollution of ground water.

The middle of the mountain has traditionally been a source of underground water for Jeju residents to drink, according to Jwa Gwang-il, secretary-general of the Citizens’ Coalition for Economic Justice, a civic group. “Sewage from the resorts could contaminate drinking water sources.”

Those Chinese-funded resorts have also already announced their plans to run casinos, though Jeju Governor Won Hee-ryong has made it clear that the provincial government won’t issue approval for casinos that could potentially evade taxes.

He added that the local government would not give the green light to real estate investments that could damage the environment or the value of the island. One Chinese company’s plan to build a 1 trillion won, 51-story building in the new town area was recently barred, with officials determining that its construction would hurt the surrounding landscape.

Additionally, the governor is considering revising the system that would grant an F-2 visa to foreign real-estate investors, either by limiting the type of land available for potential foreign investors to tourist and entertainment areas or by having them purchase land development bonds worth 500 million won on top of the cost of the real estate.