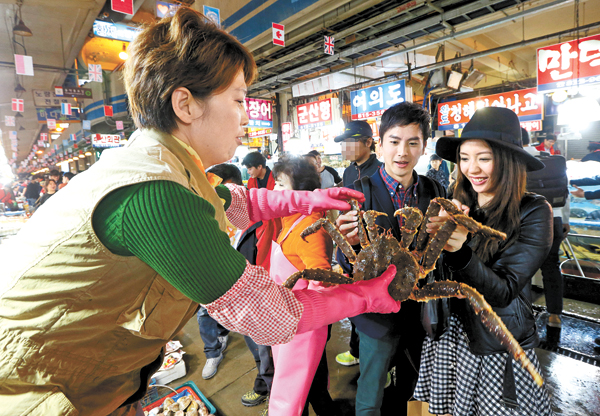 A couple from Hong Kong shop at Noryangjin Fish Market in Seoul. Many Chinese tourists drop by the fish market, popularized in large part by the drama “My Love From the Star,” which the market once appeared in.By Kang Jung-hyun

In a place where an overwhelming range of marine products are offered, it’s easy for customers to wind up eating the wrong dish if they don’t know how to properly place an order.

There are a number of factors to consider - the type of seafood, its size, shape or color, among others.

But even though Quan can’t speak or understand Korean, she had nothing to fear. The local merchants were trumpeting in her language.

As Quan and her husband walked by live sea creatures, aisle after aisle, the venders hollered in Mandarin in an attempt to grab the couple’s attention.

“Our people usually don’t enjoy raw fish,” Quan said. But now they do, she added.

“When the king crabs cost one-tenth of the ones in Shanghai, you just can’t resist them.”

Customers used to swarm to Seoul’s largest market primarily in the evenings, but merchants say that has changed over the past two years now that foreign tourists from China and Hong Kong have begun to rush in during the early morning hours and onward.

And for many store owners like Kim Jong-hae, 29, the influx has required him to adopt a new business strategy to make sure it never ebbs: learning their language.

Such efforts have grown into what Kim calls a “Chinese fad.”

“People here make Chinese business cards and go to private academies [to learn Mandarin],” he said. Some who find it a hassle go as far as hiring a native Chinese assistant, the 29-year-old added.

It is unclear how well the foreign shoppers understand the storekeepers here in general, but Ni Wen Jue, 29, finds the entire market establishment “intriguing.”

“It’s really awesome how you purchase fish in one place, and then eat it right away in an adjacent location,” she said.

“I realized just how intimate the fish market culture really is in Koreans’ everyday lives after I watched the main character from ‘My Love From the Star’ [2013-14] walk into one.”

Fiona Li, from Hong Kong, added that taking a photo holding a live octopus is a trendy way to document a visit to Korea.

“Aquariums filled with shrimp, clams, crabs, spoon worms and live fish is really quite a scene,” she said.

Tony Choi, a 22-year-old tourist from Hong Kong who was also spending time at the Noryangjin Market, said he would like to see more places on tourist information websites that “ordinary Koreans” frequent.

“Seoul tourist websites highlight nothing but the traditional palaces and the Dongdaemun and Namdaemun markets,” Choi said.

Information about cafes and clubs, where “real Korean people are,” is truly lacking, he said.

Seo Jeong-tae, a hotel management and tourism professor of Tongwon University in Gwangju, Gyeonggi, blames travel agencies for that.

“The lifestyle doesn’t bring in the money,” he said, which is why agencies aren’t crazy about selling the idea.

“Chinese tourists are setting their expectations higher and higher,” so brokerages should come up with creative tour packages to satisfy those desires, he said.