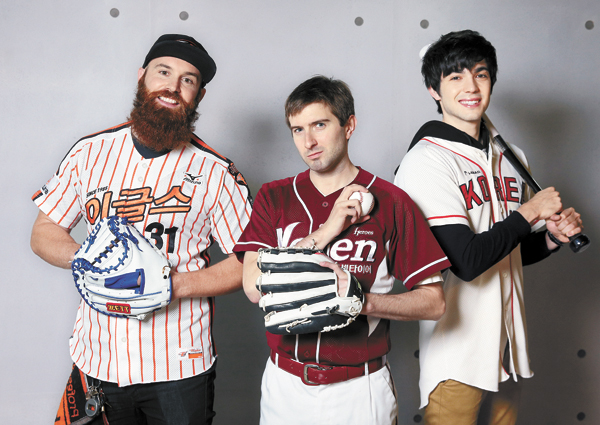 From left: Hanhwa Eagles fan Luke Hoagland of the United States, Nexen Heroes fan Ted Smith of Canada and Robin Deiana of France, who recently fell in love with Korean baseball, are ready to play ball. By Kang Jung-hyun

With the KBO postseason ongoing, Ted Smith, 27, of Canada; Robin Deiana, 24, of France; Luke Hoagland, 29, of the United States; and Takuya Terada, 22, of Japan, sat down to talk about Korean baseball.

Smith and Hoagland are English teachers, and Robin and Takyua appear on the JTBC talk show “Non-Summit.” The four men from four countries discussed baseball in fluent Korean for a full two hours.

Robin: I first thought baseball was popular only in the United States and Japan. When I watched the 2002 FIFA World Cup in Korea and Japan, I was impressed by Korea, so I thought soccer would be the most popular sport here. My father is Italian, and he cursed the Korean team when it beat Italy in the Round of 16. I didn’t, though. 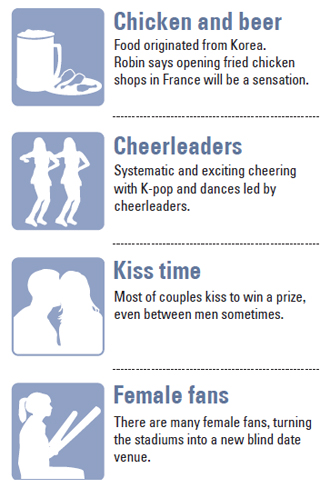 Takyua: Baseball is Japan’s most popular sport. I played baseball from third grade to middle school as a left fielder. I even led the team when I was in middle school, but I quit when I went to high school. Baseball in Japan is very strict and tough, and I had to keep my hair short. I never regret quitting baseball because I like my hair.

Luke: I’m from Monterey, next to San Francisco. As you all know, America is a baseball country. I often watched baseball on TV and even played a little. It’s natural for me to keep watching baseball in Korea.

Ted: The most popular sport in Canada is ice hockey. There is an MLB team - the Blue Jays - in Toronto, but I didn’t like them because I was from Calgary in western Canada. I was mesmerized by Nexen’s cheering. I memorized all the cheering songs, and I sometimes even lead cheering at away games.

Robin: I think Korea has a very unique cheering culture. We don’t have that many cheerleaders in France. Didn’t it originate in America? But I still prefer Korean professional baseball cheerleading, because it’s like a performance or a show. Though I’m not a big fan of baseball, it would be a good reason to go to baseball games.

Luke: Some MLB teams have cheerleaders, but they aren’t as eye-catching as the Korean ones. Korean fans look more enthusiastic when rooting for their teams, maybe because of the cheerleaders. They sing really loud even when the team is losing. It looks fun to me.

Ted: Rivalry is really fun, too. Nexen’s rival is LG, and some fans bring mousetraps to the games because the letter “G” sounds like a word that means mouse in Korean. The Kia Tigers and Lotte Giants also are rivals. It is said that Haitai, the predecessor of Kia, fought a lot with Lotte, even throwing bottles at each other. I was once hit by a chicken drumstick thrown by a Lotte fan.

Takyua: They say Lotte fans are tough here, and it is the same for the Hanshin Tigers. Fans used to throw bottles and swear at the team. But when they won, fans gathered at Ebisubashi Bridge of Dotonbori River in Osaka and jumped off to celebrate. Some of them even hurt themselves, but it was their way of expressing joy.

Luke: I’m a fan of the San Francisco Giants and their rivals are the Los Angeles Dodgers. The players even held a campaign after the fans of both teams had a huge fight. As a Hanhwa fan, I liked Ryu Hyun-jin, but I was disappointed when he moved to the Dodgers.

Robin: Korean baseball also is fun because many female fans come to the games. Because there are many women, men will be gentle.

Ted: In America, a beauty always has her boyfriend with her when she goes to baseball games. Whenever I find a pretty girl, her boyfriend suddenly shows up saying, “Honey, I brought your hot dog.” But many girls in Korea come to games with female friends.

Luke: Koreans also usually have chicken and beer when watching games, while Americans enjoy hot dogs or popcorn with beer.

Ted: They sell fried chicken in the States, though it is not so popular. Yankee Stadium sells hot dogs longer than 30 centimeters [about 1 foot] and they’re great.

Robin: They don’t usually sell fried chicken in France. I will go to baseball stadiums next year to enjoy chicken and beer.

Takyua: I was surprised to hear that they deliver fried chicken to stadiums.

Ted: It seems Robin rarely goes to baseball games. I go around to cheer for Nexen. I watched 104 games [out of 128 during the regular season] at the stadium.

Luke: I watched about 60 games this year at the stadium. I met Ted for the first time in Cheongju, when Hanwha was losing. I just said hi because I did not feel good.

Robin: You guys are so enthusiastic. By the way, can they have runs indefinitely, like 100 runs?

Takyua: They say Hanhwa is an underdog. But cheer up, because the Tohoku Rakuten Golden Eagles stayed at the bottom for many years, but they won the Japan Series last year.

Robin: I like the Doosan Bears, but they didn’t make it to the postseason.

Luke: The manager [Song Il-soo] wasn’t good enough. He was fired in the end.

Takyua: Managers of Japanese teams also get fired all of the sudden if they are not doing well. But Manager Tatsunori Hara of the Yomiuri Giants did not leave the team even though the team did not advance to the Japan Series this year because he won many titles before. His coaching staff got fired instead.

Luke: Kim Sung-keun was named Hanhwa’s new manager recently. I think the previous manager, Kim Euong-yong, didn’t get along with the players.

Ted: Hanhwa is strange. They’ve got many star players, but they make many errors, too. It is good for the team that Kim has joined.

Luke: Right. Now that Kim joined the team, Hanhwa will be a different team and will make fewer errors. I want to see the day when Hanhwa goes to the postseason.

Ted: I hope Nexen will beat Samsung in the Korean Series this year, and I think it is possible. Samsung is “grandpa.” Setup man Lim Chang-yong (38) is also old enough.