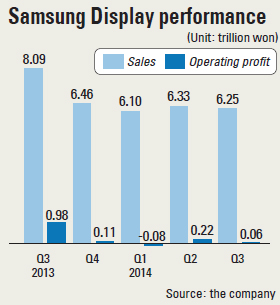 Samsung Display will undergo a managerial review by the group following its poor performance this year.

According to the display panel manufacturer, Samsung Group’s Future Strategy Office, which makes management decisions for the group, will start the consultation later this month. Sources speculate that the review could take at least two months.

The consulting team will review the company’s business plan, strategies and portfolio to find out what can be improved.

This is the first time that Samsung Display will be evaluated by the group since the company was established in 2012 when Samsung’s liquid-crystal display (LCD) business was merged with Samsung Mobile Display.

Although the company said yesterday that the consultation is a regular procedure, industry insiders speculate that the review could actually be an audit to find out who is responsible for the company’s poor performance this year.

Samsung Group affiliates that undergo managerial consulting usually go through restructuring or reshuffling after the inspection is over.

In September, Samsung Group announced that Samsung Heavy Industries and Samsung Engineering, which went through the consulting process earlier this year and last year, respectively, will merge in a bid to boost competitiveness in plant construction.

Due to this pattern, some people are speculating that Samsung Display CEO Park Dong-gun is in danger of losing his post as the executive reshuffle season approaches. Samsung Electro-Mechanics, which underwent a review in July, is also expected to face leadership changes.

Samsung Display last week posted an operating profit of 60 billion won ($56 million) in the third quarter, down 93.9 percent from a year ago. In the first quarter of this year, the company had its first operating loss of 80 billion won.

Considering that the panel manufacturer made 1 trillion won of operating profit per quarter in its heyday, the recent performance is perceived as poor.

Samsung Display’s performance is heavily affected by Samsung Electronics, which has been struggling with its smartphone sales due to competition with Apple and Chinese companies.

“The Galaxy S series and Galaxy Note series that have Amoled panels aren’t doing well,” said Eoh Kyu-jin, an analyst at IBK Investment & Securities. “The poor performance is likely to continue through the fourth quarter with the sales offseason.”

The company, which supplies Amoled panels to phone manufacturers, collects 60 percent of its revenue from Samsung Electronics. However, industry observers said that Samsung Display can’t use Samsung Electronics’ performance as a scapegoat because its goal should be to secure other customers to diversify its supply channels and minimize its dependence.

What makes Samsung Display’s performance worse is that its rival LG Display posted positive results in the third quarter.