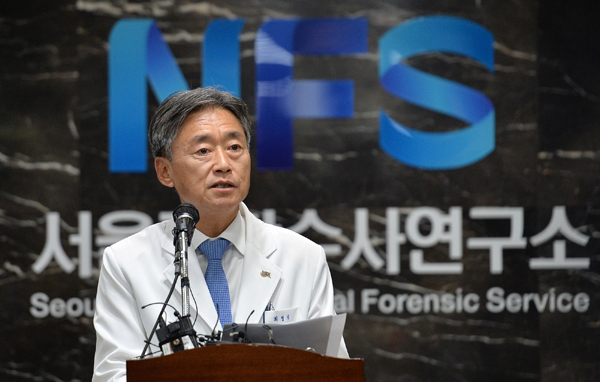 During the first autopsy on Shin Hae-chul after his unexpected death on Oct. 27, a 0.3 centimeter hole was found in his pericardium, the thin outer wall covering the heart and the beginnings of its connected vessels, according to forensic officers yesterday.

The announcement came after an autopsy that lasted from approximately 11 a.m. to 3 p.m. yesterday, adding to speculation that Shin’s death was caused by the professional negligence of the hospital that operated on an adhesion of Shin’s small and large intestines on Oct. 17.

Shin received the operation at Seoul Sky Hospital in Songpa District, southern Seoul - the same place he had gastric bypass surgery five years ago - five days before he had a heart attack and fell into a coma.

“The hole that triggered Shin’s death,” said Choi Young-shik, the head of the National Forensic Service (NFS)’s Seoul office, “was found to be related with an abdominal surgery for adhesion.”

Choi did not confirm whether or not the hole in Shin’s pericardium was a direct result of that surgery but said that there was a “correlation” between the two.

The NFS chief added that the medical cause of Shin’s death was a combination of peritonitis, an infection of the tissue inside the abdomen; pericarditis, an inflammation of the sac that covers the heart; and blood poisoning.

Previously, in doctors’ notes provided by Asan Medical Center on Friday, where the 46-year-old was treated in the intensive care unit after his heart attack, doctors stated that a hole was found in Shin’s small intestine and that food scraps had leaked through it, which had caused an infection.

But forensic officers could not find the alleged centimeter-long perforation during the autopsy because it had been removed during surgery by doctors at Asan Medical Center.

Choi said the NFS will further determine the precise cause of Shin’s death based on additional investigations involving pathological examinations and an X-ray CT scan on the body. A specific deadline was not mentioned.

Officers from Songpa District Police Precinct stated on Saturday that doctors from Seoul Sky Hospital will soon be summoned for questioning.

In response to new information in doctors’ notes provided by Asan Medical Center on Friday regarding the intestinal perforation, officers visited the hospital the following day and collected Shin’s medical records dating back five years ago.