For Park, gold’s not good enough

For Park, gold’s not good enough 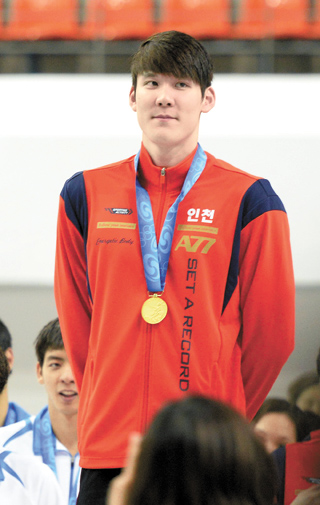 Swimmer Park Tae-hwan, who won a silver medal and five bronze medals at the Asian Games in Incheon, won four gold medals at the 95th National Sports Festival. But his times were disappointing and he was not named the festival MVP - that honor went to 22-year-old archer Kim Woo-jin, who set two world records while winning three gold medals.

The National Sports Festival was held about a month after the conclusion of the Asian Games. In the interim, Park had to participate in other sports events and ended up spending only two weeks training for the Jeju festival.

Since Park can’t afford a personal swimming pool like rivals Sun Yang of China or Kosuke Hagino of Japan, he could not properly prepare for the festival in such a short period of time.

“At first, I wanted to set records at the sports festival, but the 400 meter requires a certain amount of practice in advance,” said Park. “I wish I had begun practice about a week earlier.”

Even though he did not have enough time to adequately prepare himself, it was his sense of responsibility that brought him to the National Sports Festival. He believed he had to meet the expectations of his Incheon City Hall team, which helped him when he had a hard time finding sponsors, and fans who may have been disappointed when he failed to win a gold medal at the Asian Games.

He declined to discuss his plans for the 2016 Summer Olympics in Rio de Janeiro.

“I want to seriously think about competing in the world championships next year or the 2016 Olympics while taking a rest for a while,” said Park

But the Korea Swimming Federation is determined to send Park to Brazil in 2016.

“Given the benefits Park has received from the country, he has no choice but to attend the next Olympics,” said a high-level official of the federation.

However, it is not a matter of whether or not he competes in the next Olympics but if he can remain competitive as a world-class athlete.

Park is still struggling for the financial aid he needs for overseas training.

“It would help me to beat my record by a lot when the sponsor problem is solved,” said Park.