At cafes, animals are a controversial cash cow

At cafes, animals are a controversial cash cow 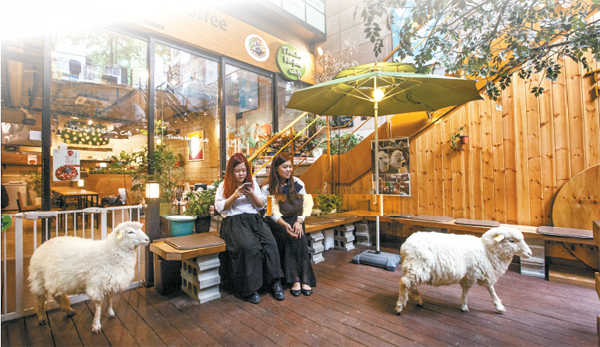 
Thanks Nature, a coffee house with a half-covered basement garden, does not seem the most suitable place for 11-month-old sheep Anna and Elsa to spend 24 hours a day.

Instead of the crisp, clean air of their birthplace, the country’s largest pasture in Gangwon, they can smell exhaust gases. They are located right next to the crowded two-lane road stretching from Hongik University’s main gate in Mapo District, western Seoul. A melee of honking horns often blankets the hutch Anna and Elsa nestle inside.

Instead of grass, a fake life-size tree adorned with glittering ornaments overlooks the fluffy four-legged animals and their small house. They are separated from the cafe interior where people drink beverages and eat waffles.

The sheep are customer magnets, though. It was an early weekday morning, but two Singaporeans had showed up to the cafe. 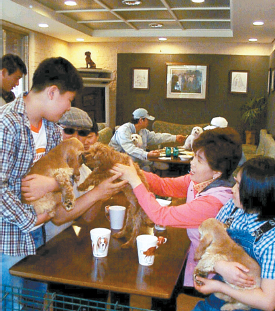 Dog and cat cafes began opening in Korea from the early 2000s. With the increasing number of cat and dog owners here, cafes have been adopting more unique animals such as sheep and raccoons recently. [JoongAng Ilbo]

“Our friend who’s been to Seoul recommended us this place,” said Leo Xue Er, a 25-year-old tourist.

Xue Er and her friend Kwan Siu Tung spent nearly 30 minutes with the sheep and then went back inside to drink their tea.

“The space seems too small for them but it’s good for the business,” said Xue Er.

As more than 10 million Koreans now raise dogs and cats as of 2012, according to the Animal and Plant Quarantine Agency, cafes hosting these creatures are no longer a big draw. Business owners want something novel, so they adopt unique animals - sometimes undomesticated ones - as a marketing tactic.

Lee Kwang-ho, the head of Thanks Nature, is one of these. He brings sheep in from Daegwallyeong Sheep Farm in Gangwon on a regular basis.

“What comes to your mind when you think of nature? Dogs and cats don’t match with the image of nature,” said Lee as he swept Anna and Elsa’s hutch.

Having sheep for the cafe was Lee’s idea when he started the business four years ago.

But he takes pride in having his own rules for the sheep.

“People are not allowed to eat while looking at the sheep here,” he said.

Anna and Elsa seem attached to Lee. They followed him wherever he went and sometimes kicked at him, urging him to feed them.

Lee replaces the two every three months, “Or they become way too big [for the space],” he said.

While a basement floor of a commercial building is not the ideal home for a pair of sheep, they are arguably better off than the two raccoons who live in another cafe in Songnae-dong, Bucheon, in Gyeonggi.

The establishment’s official name is Bonita Di Cafe, but it usually goes by “raccoon cafe,” named after the animals raised by the owner.

The nocturnal creatures try to spend most of the day sleeping, but many visitors to the cafe bother them by taking photos with them. Many also lure the raccoons with sugary treats, offering them spoonfuls of patbingsu (a sugary shaved ice dessert) or chocolate chip cookies.

“I’ve been to many cat and dog cafes but I felt awful when I went to this cafe because of the way people treat the animals,” said Ahn Ji-eun, a college student, who visited Bonita Di Cafe recently.

It took Ahn nearly two hours to make the round trip from Oryu-dong, southwestern Seoul, where she lives.

“People tried to take the raccoon out of the box when he was sleeping. And some of them opened the drawer-like box and took photos of the sleeping animal using flashes. They were bitten by the raccoons but people kept annoying them,” Ahn said.

“There was not even a sign banning people from feeding human food to them.”

When the energetic raccoons are awake, they spend the day rummaging through customers’ bags or drinking water from the bathroom toilet bowl. They sometimes go for a walk on a leash with the cafe’s part-time staff.

“Many people often tend to think satisfying one’s curiosity is a good thing and that it is one way of educating themselves,” said Cho Hee-gyeong, head of the Korean Animal Welfare Association, “but if the curiosity threatens a minority, it is not right at all.”

The biggest threat for wild animals is direct contact with humans, according to Cho.

“There should be certain distance between animals and humans,” said Cho, who’s been working for animal rights since 2001.

“Humans have been developing relationships with dogs and cats for hundreds and thousands of years, but we can’t develop such a bond with wild animals.”

Cafes with unique animals - from pythons to sea turtles to lizards - are popping up around Seoul and other downtown areas. And most see a steady stream of customers who want to get up-close and personal with them.

Living in the age of social networking sites, people photograph the animals and upload them to their SNS accounts. These photos intrigue others and promote such places, inspiring other business owners to purchase pets.

And these establishments are not good for two-legged or four-legged creatures, according to one expert.

“If these animals are not treated well, they may transmit diseases between humans and animals,” said a vet who runs the animal clinic Ahpeujimalgye in Sangam-dong, western Seoul.

He was also concerned about the confined spaces in which the animals have to live.

“Animals caged in zoos often repeat the same behaviors. We see it as a mental disease that happens to animals,” he said.

Since the animals are used as a selling point, their health is not a primary concern for many of their owners.

Although people were not allowed to feed Anna and Elsa at Thanks Nature, some cafes allow visitors to buy snacks for the animals, which is the businesses’ second-highest source of income after selling beverages.

For example, Bau House, a dog cafe located in Seogyo-dong, Mapo District in western Seoul, is one of the longest-running dog cafes in Seoul. On weekends, people wait at least 30 minutes to be seated and the cafe is also popular among non-Korean tourists.

During a recent visit to the cafe it was overcrowded, and people kept buying snacks to attract dogs to their tables. There was no limit on the number of snacks a person could purchase, which means it is likely the animals live on snacks all day long, rather than dog food.

There is “no legal ground to prevent those places from having animals in their cafes,” according to Yun Seong-hwan, an official at Mapo District Office. His main duty is managing overall animal-related issues within the area Bau House and Thanks Nature are located.

Some of the animals raised in the cafes are euthanized when the businesses shut down.

“If you care about animals, the best thing to do is to stay away from those places,” said Lee Hee-yeon, an activist from the Korea Animal Rights Association. “If you go there, please keep an eye on the animals and check whether they are well treated or not.”