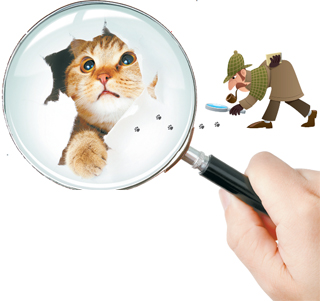 Ock Su-cheol, a 42-year-old living in Busan, was a member of staff at a law firm with an unusual habit for a middle-aged man - he raised cats and fed stray felines around his neighborhood.

But then he lost one and was inspired to change his job; he is now one of three cat detectives in the country. He often goes by Inspector Ock and is quite a celebrity among people who raise kitties.

“I was really desperate about my missing cat,” said Ock during a recent phone interview. “Although I could find my cat, I could understand how people become desperate when they lose their cats. And that’s when I got to know about cat detectives.”

Having raised cats for many years, Ock thought he was well aware of the animals and their behavior, but he feels that there are differences between his knowledge of the creatures and other cat detectives.

“That’s when I made up my mind to change my job before I become too old,” he said.

He began seeking out lost cats last May and looks for clues such as hair, paw prints and feces.

“I receive up to 10 calls on my busiest days. Oftentimes, my destination is Seoul, but the most distant destination I’ve been to is Sokcho because it takes more than seven hours for a single trip from Busan.”

Hiring a cat detective can be quite costly. Prices vary, but Ock charges 120,000 won ($115) - less than his two competitors - for about three hours of work. And the longer the distance he has to travel, the more his pay goes up.

When he successfully finds the cat on the day it went missing, he charges an additional 200,000 won bonus. The other cat detectives all ask for extra money from their clients when they complete their missions.

The job may sound lucrative, but it is daunting because of the nature of cats, which tend to sneak into shady and confined spaces when they feel insecure.

This means cat detectives spend most of their time crawling into the basements of apartment buildings or cramped places to find the animals. Sometimes they have to search mountainous areas near to cat owner’s houses late at night.

With more Koreans owning cats compared to the past, detectives like Ock are kept very busy.

According to the Animal and Plant Quarantine Agency, a state-run organization, 480,000 cats were raised by people in 2006 but the number nearly doubled to 1.16 million in 2012.

With numerous online reviews on the successes or failures of hiring cat detectives, one question could come up: Why don’t we have dog detectives?

“Many people tend to treat cats as if they are dogs,” said Ock.

“They walk their cats or go out by holding their cats with their hands. But cats run away if they come across strangers or unexpected noise ... They are really curious and they are highly influenced by hormones. They often get away during the mating season.”

For Korea JoongAng Daily readers who keep cats, Ock shared his tips for finding them if they got lost.

“If you find your cat is missing, a member of the family who is the closest to the cat should find the feline by himself or herself,” said Ock.

The person the cat sleeps with is the closest family member, Ock said.

“Don’t call out the name of the cat in a loud voice. Search all the out-of-the-way places, stairs, storehouse and boiler room.”

But Ock said the best way to love your cat is to “not lose him or her in the beginning.”