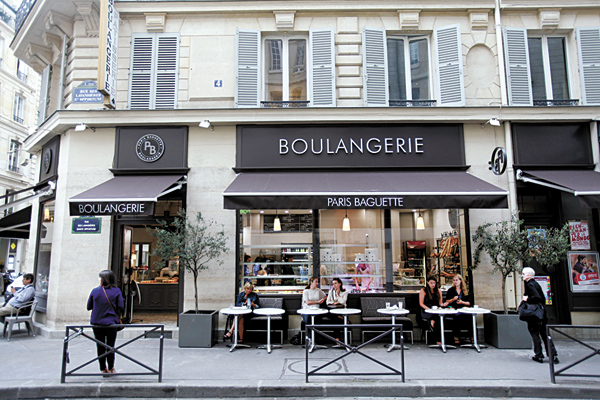 The first European branch of Paris Baguette opened in the French capital in July. Provided by the company

Paris Baguette’s recently opened branch in the French capital has seen its sales rising, with average daily sales 25 percent higher than in the first month after it opened in July, the company said yesterday.

SPC Group, which owns the country’s largest bakery chain, opened the Paris shop near Chatelet subway station and landmarks such as City Hall, Notre-Dame Cathedral, the Pont Neuf bridge and the Louvre.

The 200-square-meter (2,000-square-foot) bakery serves an average of 800 people per day, a 20 percent increase compared to its first month.

The stores says it sells about 700 baguettes, its signature baked good, each day. Baguettes made at the Paris shop use the same recipe as the Korean branches, but the ingredients come from France.

Paris Baguette said during lunchtime, sandwich sales were high and customers purchased more sweets such as tarts and cakes in the evening.

Tourists account for a large share of customers on the weekend, buying eclairs, choux pastries and macaroons.

The store has also introduced new menu items tailored to locals, including a set lunch menu with sandwiches, juice and dessert.

“Some people were concerned when we launched the store in Paris because France is full of bakeries of high quality,” said a representative of SPC Group.

“But we are getting off to a good start and our baked goods are certainly well received by both locals and tourists.”

Paris Baguette also has stores in China, the United States, Singapore and Vietnam, but considers the French bakery to be its flagship store.

The company said it is looking to break into other European countries.