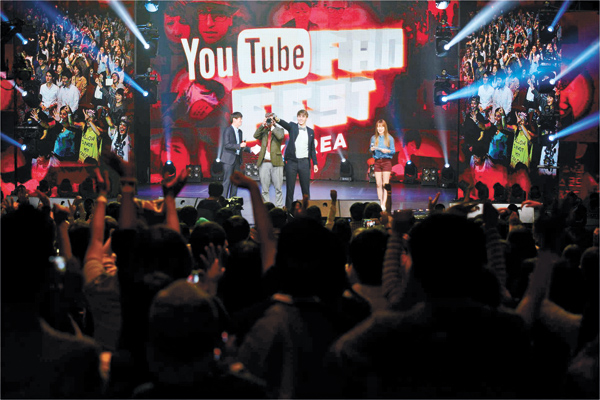 YouTube stars perform at YouTube FanFest at Hongik University Art Center in northern Seoul on Sept. 26. Provided by the company

A popular broadcasting jockey, or BJ, has gained tens of thousands of subscribers by broadcasting himself playing games with friends, and a Canadian couple who came to Korea as English teachers used YouTube to become the self-proclaimed “world’s biggest promoters” of Korean culture on their “Eat Your Kimchi!” channel.

Another college student produced content that mixed beauty with comedy to attract people not normally interested in makeup and beauty products.

While social networking services (SNS) focus on sharing photos and leaving comments for friends and acquaintances, YouTube has been leading the popularization of video-sharing social media worldwide.

Vloggers, or video bloggers, create content based on their hobbies and interests. They were able to make a profit after October 2012, when YouTube began to allow businesses to run their ads on individual videos.

In Korea, there are a growing number of cases where users develop videos that are every bit as competitive as professional content and make a living at it.

A new group of full-time YouTubers is pioneering new careers. This isn’t a success story of only just a few, rather it is a new trend in job creation.

In particular, growth was mostly seen in the game and beauty sectors. Hits for game channels on YouTube surged ninefold from 2012 through July.

“Large Library TV” channel, one of the most popular channels in Korea, was created by an individual who entertains while playing online games and, unlike other game broadcasters, does not use harsh language.

By August, the channel had more than 850,000 subscribers and had exceeded 200 million cumulative hits.

YouTube’s growing popularity in Korea reflects the service’s global appeal, with more than one billion visitors every month and 100 hours of new videos uploaded every minute.

In 2013, the advertising profits of YouTube partners shot up 60 percent compared to 2012, while the number of subscribers tripled. According to YouTube, more than one million channels make significant profit from advertisements, with thousands of channels bringing in $100,000 each annually.

The power of YouTube, which has emerged as the world’s largest video community, lies in its barrier-free environment, in which anyone with an idea can create a channel.

“Individual creators with various ideas attract users as people consume new content faster in the mobile environment and demand for content tailored to each individual’s preference increases,” said Park Tae-won, who is in charge of online partnership at Google Korea.

“With YouTube, anyone can become a creator just with the Internet and a smartphone to shoot a video. In particular, as more successful cases emerge in Korea with a solid number of subscribers, they are meeting with numerous opportunities, such as partnerships with companies and profits from advertisements.”

YouTube said it provides opportunities to connect users with companies and to prepare them for online and offline promotional events.

YouTube Spaces in Los Angeles, London, Tokyo and New York are designed for creators to produce video content, learn new skills and collaborate. YouTube Korea, which does not have a YouTube Space, says it is nonetheless trying to find potential creators, and train and support them.

“It was quite a huge event held simultaneously in India, Singapore, Australia, Korea and Japan, and we confirmed there is a solid fandom for individual YouTube stars,” said a spokesman for YouTube Korea.