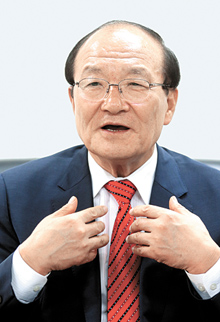 Kim Jong-dae, director of the National Health Insurance Service (NHIS), is one of the very few - if not the only - leader of a state-run organization who operates a blog.

The blog, the Health Insurance Study Room, covers the history of health insurance, its key policies and the theoretical background.

The 67-year-old also has a personal Facebook page, through which he says he communicates with his 15,000 employees at the NHIS and promotes their work to the public.

On both Kim’s blog and Facebook page, the most viewed content, he said, is that related to the health insurance system’s policies on insurance premiums, which he said are “unfair and don’t correspond with the changes in society.”

The following is an edited excerpt of the interview with Kim that was recently conducted by the JoongAng Ilbo:

Q. What are some of the problems with the health insurance system?

But in terms of those who are self-employed, we collect premiums based on private assets, gender, age and whether they own a vehicle - even from those who don’t have a regular income. [Due to the complexities, the NHIS has to deal with about] 5.73 million complaints each year.

Why do you believe now is the time to reform the current system?

The NHIS has posted a 3.4 trillion won ($3.15 billion) surplus this year alone, bringing the cumulative [surplus] to 11.6 trillion won. Reform can’t be realized when there is a deficit. ... The government announced it would present a final draft on reform plans by late last year, but then extended that deadline to March this year, June and then September; still, there are no signs of such plans.

In what way do you think the system should change?

We have personal data on 92.2 percent of all health insurance subscribers, and we’re equipped with the necessary infrastructure to collect premiums solely based on the subscriber’s income. For those who don’t have a regular income but a substantial amount of personal assets, we can collect premiums from them separately based on certain criterion. Taiwan did it, so I don’t see why an information-tech heavyweight like us can’t do it.

Some critics say that the NHIS is imprudently providing its subscribers’ medical data to the police and prosecutors.

It’s true that we have handed over 4.35 million pieces of data to authorities since 2010 on matters regarding our subscribers’ medical operations - like the date of a procedure as well as the name and location of the hospital - or changes in their entitlement to receive health insurance benefits. And in cases when [the NHIS] determines that the precise name of a subscriber’s disease is necessary in an investigation, we provide that as well.

But when it comes to the 1,654 types of diseases, officers must approach us with a search warrant to be provided with the name. [Through this process, the NHIS] was able to reclaim insurance money that was not intended to go toward covering our subscribers’ medical expenses.

If we need to amend [this process], the government or the National Assembly will revise the relevant laws.

How is your lawsuit against the tobacco industry coming along?

Our statistics show that health care costs for smoking-related diseases add up to 1.7 trillion won a year. The dangers associated with smoking spread widely across society around the time of our suit, and it contributed to the government’s decision to increase the cigarette tax. Our second hearing falls on Friday, and we are going to do our best to win.

The NHIS also called out obesity.

The percentage of Koreans who are overweight or obese is 31.8 percent, and we’ll end up in serious trouble if we don’t act now. We must revitalize health education at schools. We recently organized a task force on this matter and plan to draft solutions by the end of next year.