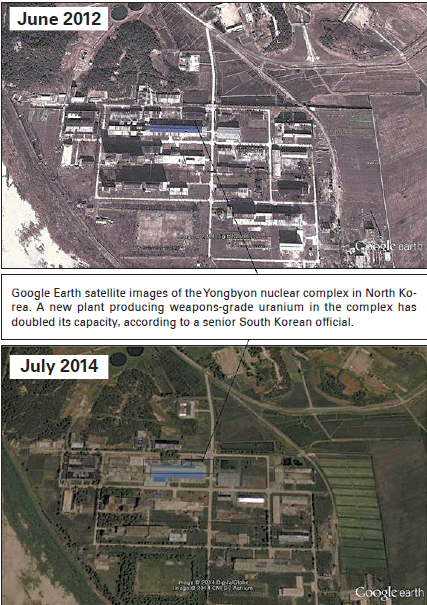 “In 2012, the North started building a new facility next to its old uranium plant, about 120 meters long and 15 meters wide,” the official in charge of handling North Korean intelligence said. “The new facility is about the same size as the old one. It recently completed construction and has started operation.”

The new plant to produce highly enriched uranium is in the Yongbyon nuclear complex, the center of the country’s nuclear arms program. It was built next to a uranium facility that was shown to a visiting U.S. scientist in 2010. The North invited former Los Alamos National Laboratory director, Siegfried S. Hecker, to Yongbyon and showed him the facility with about 2,000 gas centrifuges to enrich uranium.

Infrared cameras used by Korean and U.S. intelligence authorities have detected heat that was emitted when the centrifuges in the new plant began operating, the source said. “We have to monitor a little longer to see if the new plant actually started producing weapons-grade materials, but it is our assessment that it is in operation,” he said.

In August, the Institute for Science and International Security said construction materials inside the Yongbyon nuclear complex had disappeared while a train was detected on a railway linked to a building. It concluded that work was continuing to expand the centrifuges and reactor facilities.

The newly built facility is about the same size as the old one, according to the source, leading to the estimate that it is also equipped with about 2,000 centrifuges.

“If the North operates all 4,000 centrifuges year-round, it can produce about 80 kilograms [176 pounds] of highly enriched uranium annually,” said a nuclear engineer from a state-run institute who requested anonymity. “That is enough to build four to five nuclear bombs.”

The operation of the new facility is expected to worsen fears about Pyongyang’s nuclear program.

“Although warheads using highly enriched uranium are less powerful than plutonium-based bombs, they are relatively easier to build,” said Lee Choon-geun, a research fellow at the Science and Technology Policy Institute. “They can be built without a nuclear test.”

Lee said the North can also produce highly enriched uranium at other clandestine facilities outside of Yongbyon.

With the progress, the last remaining hurdle in the North’s nuclear arms program will be acquiring the technology to miniaturize nuclear warheads so they can be fitted onto ballistic missiles. Although Korean and U.S. intelligence authorities have not obtained hard evidence that the North had succeed in producing a nuclear-tipped ballistic missile, they suspect that Pyongyang has almost mastered the technology.

The North started its nuclear arms program by producing weapons-grade plutonium, but made a switch to producing weapons from highly enriched uranium. It admitted to the existence of the uranium-based program in 2002.

Defense Minister Han Min-koo testified at the National Assembly on Oct. 27 that the North has technology capable of building a bomb using its uranium enrichment program. He also said it is believed that the North’s miniaturization of its nuclear technology has improved considerably, although there was no confirmation on how far.

A nuclear expert in Washington said the time has come for the South to assume that the North is a nuclear-armed state, saying it takes a minimum of two years or a maximum of seven years for a country to succeed in miniaturization of nuclear warheads after a nuclear test.

“We continuously monitored the Punggye-ri nuclear test site of the North and the amount of earth detected before last year’s nuclear test was just a little more than half of what was observed at the time of the first test,” said a South Korean intelligence official who exchanged information with U.S. authorities. “That shows that the space for the place where the nuclear explosive device was installed was reduced.”

For a nuclear-tipped missile, it is required to miniaturize an atomic warhead to smaller than 90 centimeters (35 inches) in diameter and less than one ton in weight. Detonation technology for the highly enriched uranium inside the warhead is also key.

The Korean government believes that the North has tested detonation devices since the early 1990s and the frequency of the tests rapidly increased recently. Intelligence analysts, therefore, suspect that the North is in the last stage of miniaturization.

Concerns are also high because highly enriched uranium weapons can be produced without explosion tests. The type is known as “Little Boy,” which the United States dropped in Hiroshima in August 1945.

“If the North uses the ‘gun’ method, like the Little Boy for which the United States used 64.1 kilograms of highly enriched uranium, the North can create nuclear bombs without tests,” said a South Korean government official. “If the North attempts to create nuclear arms by secretly using the gun-type bombs, it is hard to detect and stop the program.”

Although the South Korean government’s official stance is that there is no evidence that the North has succeeded in miniaturization, concerns are growing that Pyongyang is just one step away from possessing nuclear-tipped missiles.

Gen, Curtis Scaparrotti, the commander of U.S. Forces Korea, already addressed the issue. “Personally, I think that they certainly have had the expertise in the past,” Scaparrotti said last month. “They’ve had the right connections, and so I believe have the capability to have miniaturized a device at this point, and they have the technology to potentially actually deliver what they say they have.”