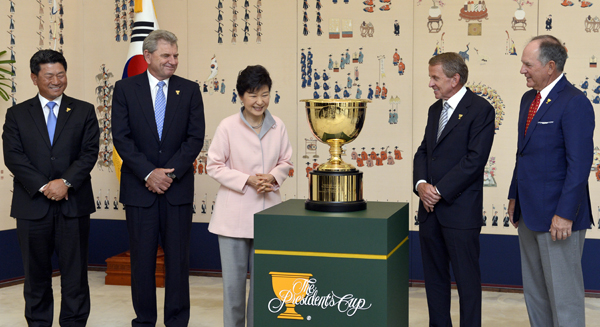 
President Park Geun-hye will serve as the honorary chairwoman at the annual 2015 Presidents Cup slated to take place next October in Incheon, the Blue House said yesterday.

The president accepted the role at the request of Timothy Finchem, the current commissioner of PGA Tour, who visited the presidential office yesterday with Presidents Cup officials.

Europe competes against the United States in the much older Ryder Cup, which has been hosted alternately with the Presidents Cup.

A current or former national leader from the host country has traditionally been responsible for taking the honorary chairmanship. President Park, Korea’s first female head of state, is the second woman to serve following former Australian Prime Minister Julia Gillard.

Park’s predecessor was U.S. President Barack Obama, who acted as chairman in 2013 as well as in 2009, when he was in his first term.

President Park does not play golf, however.

In Korea, the sport is largely perceived as a luxury - mostly due to the hefty costs involved in playing. For that reason it has on many occasions been used as a lobbying activity or a means of entertainment.

The president is renowned for her thriftiness and emphasis on civil servant integrity.

Though she has never officially banned golfing among government workers, it has become an unwritten rule among her subordinates that the sport is discouraged.

In June 2103, when Lee Kyeong-Jae, then chairman of the Korea Communications Commission and one of the president’s close aides, requested during a cabinet meeting that civil servants be given the official endorsement to play golf “to boost spending under bad economy,” Park made it a point not to answer.

When one of her senior secretaries broached the issue again the following month, she responded curtly.

“I have never told anyone not to play golf,” she was quoted as saying by an official who witnessed the conversation. “But do you think you can possibly afford the time for it when you are so busy?”

Many past governments ruled in their initial stages that civil servants should refrain from playing golf as a way of demonstrating tightened discipline.

The 2015 Presidents Cup will be held from Oct. 6 to 11, 2015, at the Jack Nicklaus Golf Club in Songdo, Incheon. This is the first time the event will be played in Asia.

Approximately 1 billion households across 225 countries are expected to tune in to the broadcast, which will be aired in 30 languages, according to the organizing committee.