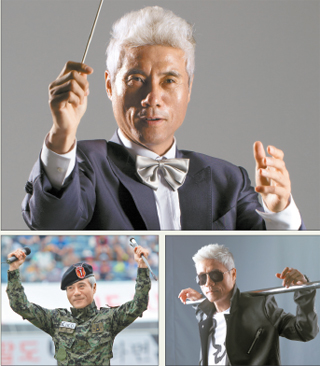 Park Kyung-hoon, the manager of Jeju United Football Club, is well known for his devotion to the team, and it appears his efforts are starting to pay off as the club is ranked fourth in the K League and drawing more fans than ever.

Park is nicknamed as the “gray-haired gentleman” and often wears dress shirts without a tie, which reveals his balanced and well-shaped body. He also is known to be pleasant and kind, and was once a professor of football at Jeonju University.

Park is friendly because he doesn’t have the ego of a typical manager, and in the past few years he has demonstrated that he knows how to have some fun and coach as well.

It began when the team adopted the slogan “Tamna Battle” after the old name of Jeju Island before a home match in May last year. He showed up for the match dressed like a three-star general, complete with a beret and sunglasses.

Two months later, he wore a leather jacket and an undershirt engraved with “Uiri,” the catchphrase of actor Kim Bo-sung. The word can be translated as camaraderie among men. He also shouted “Igiuri,” a combination of the Korean words meaning “win” and “Uiri,” promising that his team would win.

Last month, he turned into a conductor. With the team’s slogan “Orchestra Soccer,” he dressed in a tuxedo and conducted 42 members of Seogwipo’s municipal orchestra in the cheering song of Jeju United.

He says it is his “responsibility” that drives him to carry out those performances.

“A professional manager is obliged to improve the team’s ranking and popularity,” Park told the JoongAng Ilbo at Jeju International Airport on Saturday. “Investment does not always correlate with the two, but they cannot be achieved without hard effort. When the club is trying hard on the team’s marketing despite difficult circumstances, how can I step back and do nothing because of my dignity?

“People tried to stop me at first, but they now understand my intent.”

The fact that the K League is not hugely popular also played a part. The gap between the popularity of baseball and football in Korea is getting wider, and the Korea Football Association has been criticized for not changing anything since the split system was adopted in 2012. Fans also say that by going to the split system, football officials are abandoning the six teams left in the lower half.

“The current K League is not lively in general,” said Park. “It is very important to show good performances in matches, but we also need to fix the problems that made fans leave, including the split system.”

Jeju United is like a role model for other football clubs in Korea. Because of the efforts by Park and his players, the team is now in fourth place, despite a budget for player salaries that is ninth out of 12 teams. The team is trying to get into the top three in order to advance to the AFC Champions League.

The team has averaged 7,266 visitors per match this year, up from 6,464 in 2013. The figure rose above 7,000 for the first time since the club began keeping track of attendance in 2010. It is a big number given that about 60,000 people live in Seogwipo, where Jeju United’s home stadium is located.

Park has two goals this season. The first is to finish the season in third place and the second is to have more than 20,000 fans attend a home match. He pledged that he will dye his hair orange if the second goal is achieved.

“I have always dreamed of winning a match with orange hair blowing in the wind at a sold-out Jeju World Cup Stadium,” said Park.