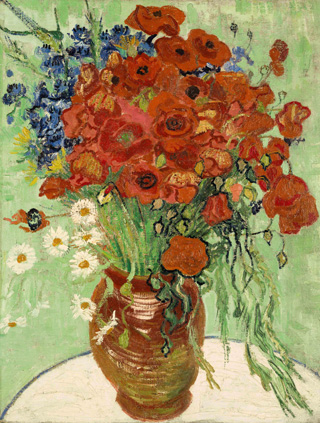 Vincent van Gogh’s “Still Life, Vase With Daisies and Poppies” is one of the few works sold during his lifetime and was painted weeks before his death; the painting sold for 61.8 million dollars by Sotheby’s in New York on Tuesday. [AP/NEWSIS]

NEW YORK - A rare piece of artwork painted by Vincent van Gogh weeks before his death sold for $61.8 million Tuesday at a sale kicking off New York City’s fall auctions of impressionist and modern art.

The 1890 painting, “Still Life, Vase With Daisies and Poppies,” had expected to fetch between $30 million and $50 million at Sotheby’s evening sale in Manhattan.

Van Gogh painted the bouquet of wildflowers at the French home of his physician, Dr. Paul Gachet. It’s one of the few works the Dutch artist sold during his lifetime.

One of the founders of the Museum of Modern Art, A. Conger Goodyear, acquired it in 1928. It remained in the family for decades and was on permanent exhibition at the Albright-Knox Art Gallery in Buffalo for 30 years. The most recent owner bought it around 1990.

The auction record for a van Gogh is $82.5 million.

The big-ticket auction at Sotheby’s also brought in $101 million for “Chariot,’’ a rare sculpture by Alberto Giacometti. The 1951 bronze sculpture features an elongated, goddess-like figure perched atop a wheeled chariot. The price almost broke the $104.3 million record for the Swiss artist. The 1951 piece, embellished with paint to enrich the textural quality of the bronze, has been in the same collection for over 40 years. Giacometti made six casts of the “Chariot’’ during his lifetime. The one sold Tuesday is one of only two painted examples.

Another important sculpture sold at the auction was Amedeo Modigliani’s “Tete.” It fetched $70.7 million, just topping the previous auction record for the artist at $69 million.

The elongated head was carved in 1911 and 1912 from a block of limestone scavenged from a Paris construction site. It had a presale estimate of $45 million.

The auction house Bonhams, which is selling more than 700 items from the homes of Lauren Bacall, offered two Henry Moore sculptures from her collection on Tuesday.

The legendary actress’s other artwork, jewelry and furniture will be offered for sale in March. AP