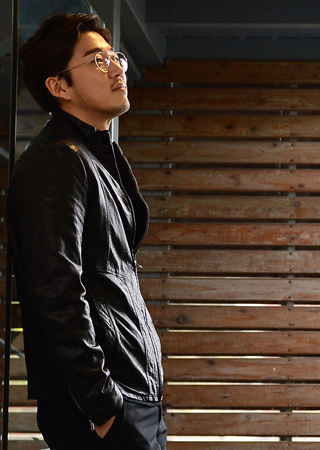 
Ten years after he quit singing in the popular boy band g.o.d. in order to become a professional actor, Yoon Kye-sang has let go of the pressure and is finally enjoying himself.

The role contrasts with the dark, serious roles he has played in the past, apparently in an attempt to erase his former image as a teen idol.

In a recent interview with Ilgan Sports, a sister company of the Korea JoongAng Daily, Yoon shared his current contentment and also spoke frankly about g.o.d.’s recent reunion.

Q. “Red Carpet” is director Park Beom-su’s first feature film. What motivated you to take on a role in the movie?

So you didn’t have any prejudice against him?

Not at all. You will know when you meet him. He has a bright and positive spirit. He talks a lot with actors. In fact, he and I became good friends. He understood my inner conflicts and inferiority complex well.

What do you mean by your inferiority complex?

When I first started acting, I felt that I was not good enough, mostly because of my background as a member of a boy band. I was also under pressure to excel so that I could beat people’s expectations and show them that a former singer can also act. At the time, I thought my singing career was no help to my acting. But I was totally wrong. I soon realized that I have something that other actors don’t.

All of g.o.d.’s members came to the film’s VIP screening. Did they like the movie?

They all said they were very moved, especially by the message that the movie delivers. In fact, we are sort of sentimental these days, as we’ve been performing together and pursuing the same “dream” since the reunion. We have formed this new bond, as we’ve aged quite a bit since our younger g.o.d. years. They were deeply inspired.

It appears that prejudice against pop idols was worse in the past.

True. But we were also very bad at acting [laughs]. We actually had no time to study acting. We were taken to a venue, and we performed there. It was the same when we were given an acting gig - there was no prior training. So when I see pop singers these days who do both singing and acting well, I am impressed and envious.

What’s your goal as an actor?

About four years ago, I wanted to be an award-winning actor. I wanted my films to be record-breaking. But now I’ve realized how silly those goals were. My goal now is to continue to act, and to feel content in the process. That’s what I’m focused on these days, too. I realized that when I let go of my greed and stop comparing myself to others, I can be happy.