Son shows his potential with 2 goals for Bayer

Son shows his potential with 2 goals for Bayer 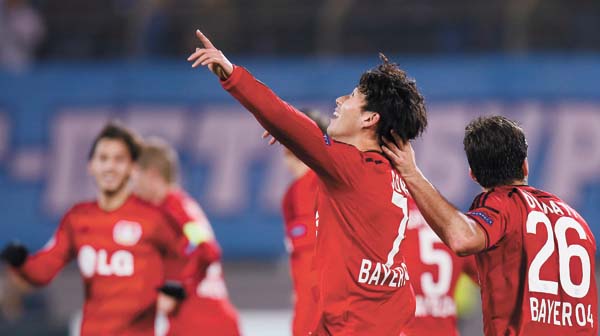 Son’s two goals in five second-half minutes earned Leverkusen a third straight win in the competition and moved them a step closer to securing a spot in the knockout stages.

“He is growing in stature and is becoming a lot more consistent,” Schmidt said.

“He has a lot of potential so I can only show my admiration for him for what a good game he had today.”

The Korean, who has now netted three times in this season’s Champions League group stage, was not getting carried away with his own performance.

“The whole team fought hard to win the three points. So I don’t think I am the hero, the whole team is the hero.

“There have been many career highlights, but it was certainly something special to score my first double in the Champions League. I think that’s just extraordinary,” he added.

Despite conceding the majority of possession and territory, Leverkusen had arguably the better opportunities throughout the game.

“We deserved the victory,” said the 47-year-old Schmidt.

“The main thing was the players kept their desire and will even though they were coming off the back of three difficult games. ...

“We have nine points,” added Schmidt. “We want to look at things in an optimistic frame of mind and we want to achieve big things.”

The Russians were much improved from when the two sides met in Germany two weeks ago, where Zenit suffered a 2-0 reverse.

They were, however, unable to create many meaningful opportunities, aside from substitute Jose Rondon’s 89th-minute consolation.

The defeat was a severe dent to Zenit’s qualification hopes, but Coach Andre Villas-Boas was still pleased with his side’s performance.

“We were really unlucky today because we played very, very well,” said the Portuguese.

“The players looked fantastic in the first half and I could have absolutely no complaints. Hulk hit the post and [Alexander] Kerzhakov had two good opportunities.

“We were the dominant side and deserved to win the game. The second half followed a similar pattern, but Bayer were lucky with their first goal and then they just hit us on the counter attack.”