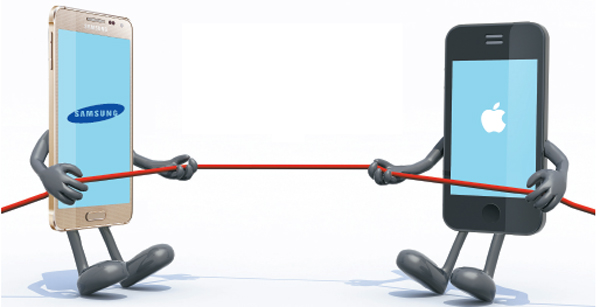 Samsung Electronics has started a monthlong compensation program for customers who subscribe to its membership program and return their old phones as the Korean tech giant tries to defend its market share against Apple with iPhone fever spreading.

Samsung said consumers who bring in an old phone will receive what it calls “Samsung points,” which can be used as a discount toward purchasing new Samsung products at its online stores, service centers and large discount store chains such as E-Mart and Homeplus.

The nation’s largest electronics company said that it will accept old Galaxy phones and used phones from other companies including Apple’s iPhones and LG Electronics’ G series.

The event will last until Dec. 4 and consumers can return one phone per person after they sign up for a Samsung membership.

“This program was planned to give special benefits to Samsung Electronics’ membership customers,” said a spokesman for the company.

Mobile carriers have held programs to buy secondhand phones from customers in the past, but it is unusual for a manufacturer to take used phones in exchange for cash benefits.

Samsung is fighting to defend its domestic market share after mobile carriers estimated that 120,000 to 130,000 iPhone 6s were sold during the first week of the smartphone’s launch.

The carriers predicted that by Friday, iPhone 6 sales will exceed the total sales of the Galaxy Note 4 since its launch on Sept. 26.

Hana Daetoo Securities said that the profit margin of Samsung Electronics for the third quarter was 7 percent, far behind Apple’s 27 percent.

The Korean tech giant posted a 20 percent profit margin in the first quarter of this year.

However, as competition became fiercer with new low-end phones from China in the second and third quarters, its profitability worsened.

Apple posted a record-high operating-profit margin of 39 percent in the fourth quarter of 2011 and since then, it has gone through ups and down but stayed in the 30 percent range.

Analysts predicted that Samsung’s operating margin will decline further even though it will launch the Galaxy Note 4 and A series in China this quarter.

“Due to spreading smartphone use, it has become hard to find distinctions between Samsung products and others,” said Lee Seung-hyeok, an analyst at Korea Investment & Securities. “Samsung Electronics’ fourth-quarter operating margin could possibly fall to 5 percent.”

The three biggest local mobile carriers yesterday made public apologies for the illegal subsidies given on the iPhone 6 and iPhone 6 Plus, which caused consumers to flock to phone retailers over the weekend.

Customers who lined up to buy the latest Apple phones bought them for 100,000 won to 200,000 won ($92 to $184). The government stopped the sales and warned stores and mobile carriers that it could hand down serious punishments including criminal prosecution.