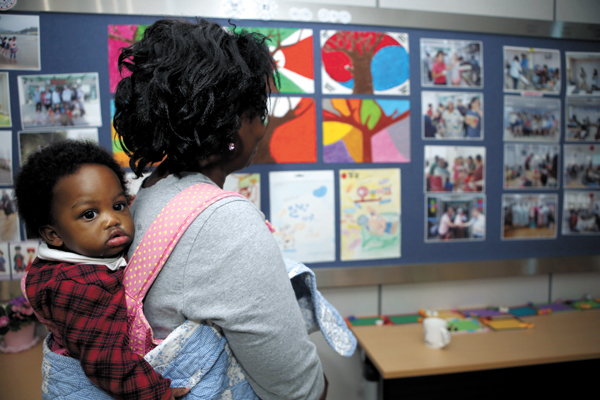 An asylum seeker from Africa stands in a classroom last month at the Korean Immigration Reception Center in Incheon, Gyeonggi, while carrying her baby on her back. By Kim Chun-sik


Of the 8,520 foreigners who have applied for asylum in Korea since 1994, only 434 have been acknowledged as refugees and permitted to stay here by the local government.

Their screening process takes about a year to complete as officials from the Ministry of Justice investigate whether their political or religious reasons to flee their home countries are valid.

Indeed, many of their stories are heart-wrenching, but authorities say many are also fabricated.

During the year-long screening, asylum seekers may apply to reside temporarily at the Korea Immigration Reception Center in Incheon, Gyeonggi - a procedure that also requires a strict evaluation by the Justice Ministry.

The three-story building, which opened in February, may be their shelter for as long as nine months, and workers there teach everything from the Korean language to Korean culture.

A reporter from the JoongAng Sunday, an affiliate of the Korea JoongAng Daily, recently made a 24-hour visit to examine how the refugees were adjusting to their new home.

A Korean language class is held at 9:30 a.m., and all 54 boarders are required to participate. The younger students, who seemed to have an easier time absorbing the material, were busy tutoring the adults.

“It’s not easy,” a middle-aged Chinese woman, sitting by her 7-year-old daughter, repeated in Korean.

When it comes to meals, all three are provided by the center, and for a single person that adds up to about 4,600 ($4.25) won each day. But the budget is so minimal, said Kim Tae-wan, who oversees management support there, that even food aid nearing its expiration would be helpful.

At 1:30 p.m., some took part in a Korean culture class taught in English that showed videos ranging from traditional Korean performances to local movies.

The participants who understood English were busy translating the instructor’s explanations into their mother tongue so that their partners could follow along as well.

When Korean figure-skating star Kim Yu-na appeared on the screen, those from Africa and the Middle East in particular gasped at her stunts, their eyes widened. A while later, Psy’s hit “Gangnam Style” (2012) was featured and a few men got on their feet to mimic his signature horse-riding dance. Women wearing their hijabs clapped out of joy.

In a personal interview with a teenager from Yemen, the refugee tried to explain in broken English the reasons behind his escape, though he was only able to repeat the words “uncle” and “kill.”

Only after using exaggerated body language was the reporter able to infer that his Shi’ite uncle had attempted to kill him and his father, who are both Sunnis.

The reporter’s roommate from Egypt added that he was imprisoned nine times for alleged political crimes. When the reporter asked if he would be in great danger if forced back, he flashed a faint smile, and said “Insha’Allah,” or “God willing” in Arabic.

But even if Korea refuses his application for asylum, he said, he would be grateful to the country for, at least, providing shelter.

For Choi Yeong-il, who works as a bus driver at the center, the refugees are like his “own children.”

“I was invited to a Yemeni restaurant a while ago,” he said, recalling the time a refugee whose asylum was acknowledged by the government personally contacted him after leaving the support center.

“The food was hard to eat because it was cooked in strong spices, but I didn’t let my discomfort show,” he said. “I was thankful for the kind gesture.”