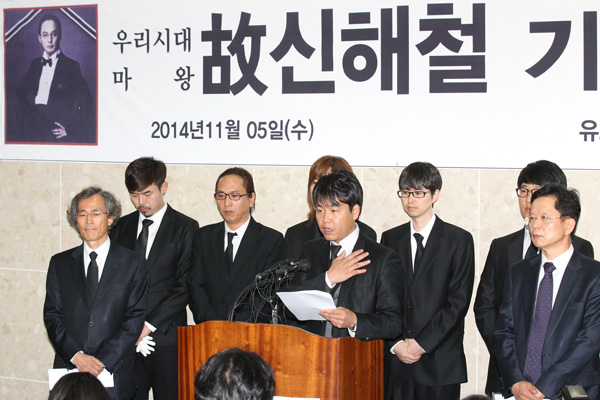 Kim Jae-hyung, head of Shin Hae-chul’s agency, KCA Entertainment, speaks during a press conference yesterday at Utopia Memorial, the same place where Shin’s remains were placed after he was cremated at Seoul Memorial Park hours before. By Lim Hyun-dong

Representatives of late singer Shin Hae-chul yesterday called upon Seoul Sky Hospital to “reveal the truth” about surgical operations its doctors performed on the musician prior to his unexpected death on Oct. 27.

The statement was made during a press conference held at Utopia Memorial in Anseong, Gyeonggi, where Shin’s remains were placed after his body was cremated at Seoul Memorial Park hours before.

“The head of Seoul Sky Hospital must accurately reveal the truth,” Kim hyung-ryeol, Shin’s brother-in-law, said yesterday at the conference, adding that the hospital’s statements must be based on “the dignity of a medical specialist, the responsibility of having conducted the operations and the conscience of a doctor.” 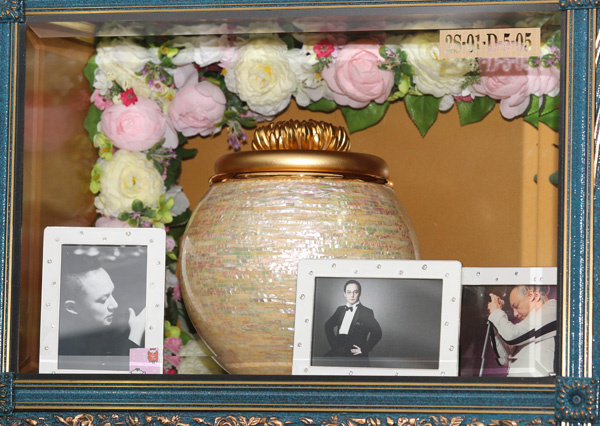 Shin’s remains are placed at Utopia Memorial in Anseong, Gyeonggi, yesterday, nine days after his death on Oct. 27.

Kim continued that he feels “regret” about how the case is progressing because conflicting information has been released about the precise reasons for Shin’s passing.

The National Forensic Service announced Monday after a four-hour post-mortem examination on Shin’s body that a hole in his pericardium, the thin outer wall that covers the heart, caused the singer’s death.

It also added that the perforation “was found to be related with an abdominal surgery for adhesion.”

Surgeons at Sky hospital operated on an adhesion of Shin’s intestines on Oct. 17, five days before he suffered from a heart attack and was rushed to Asan Medical Center.

Doctors resuscitated Shin on arrival at Asan and “cut out part of his intestines, as some were attached to each other,” according to an official at the center, who added that Shin also “underwent various tests” to determine what triggered the heart attack.

A lawyer representing Sky denied those allegations Tuesday, suggesting that the responsibility lies with Asan, where the 46-year-old died. Park also inferred that Shin’s fatality was partly his own fault for consuming food he was not supposed to.

“There’s really nothing worth refuting in Sky Hospital’s statement,” Seo said Tuesday, adding that “it isn’t an issue” worth discussing.

“They’re saying that because they feel cornered,” said Seo. “If Shin was really in danger, they shouldn’t have discharged him.”

In yesterday’s meeting, Shin’s aides said they are “grateful” that Asan has provided them with medical documents about the surgery its doctors performed on Shin, suggesting that they are not accusing the center of having a hand in his death.

But forensics officers remain open to the possibility that Asan played a role in the entertainer’s passing, stating in an exclusive interview with the JoongAng Ilbo on Tuesday that they will “closely examine which hospital caused Shin’s death by reviewing various materials.”