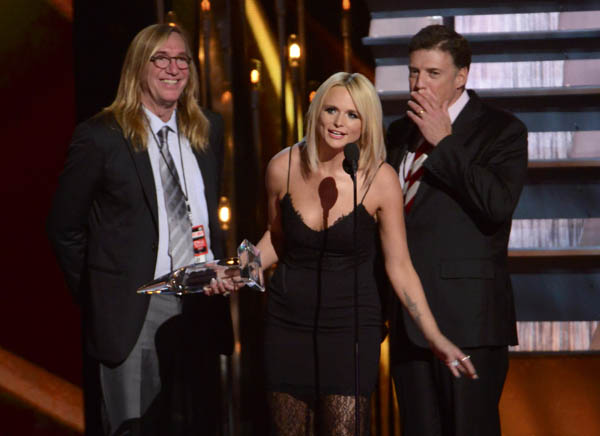 Singer Miranda Lambert accepts the Album of the Year Award for “Platinum” with her producers Chuck Ainlay, left, and Frank Liddell during the 48th Country Music Association Awards in Nashville, Tennessee, on Wednesday. [REUTERS/NEWS1]

Lambert, 30, who led all nominees with nine nods, earned her record fifth female vocalist of the year award.

“I don’t know what to say. I can’t believe I’m standing here. I can’t believe this is my life,” an emotional Lambert said accepting the award she has won five consecutive years. “Damn it! I cry every time.”

The Texan also won CMA Awards for album of the year for “Platinum,” single of the year for the wistful “Automatic” as well as sharing the musical event of the year award with Aussie singer Keith Urban for “We Were Us.”

“I have long sought to have one of these in my hands,” Bryan told reporters.

The 48th annual CMA awards show, which competes with the springtime’s Academy of Country Music Awards for prestige and television audience, is one of the top promotional events on the country music calendar. Winners are chosen by the CMA’s 6,000 members. Blake Shelton, Lambert’s husband, also won his fifth consecutive male vocalist of the year award.

Hosts Brad Paisley and Carrie Underwood’s show opening drew attention to the absence of Swift, who has shed her country roots for pop music, with a comical song about “Postpartum Taylor Swift Disorder,” or PPTSD.

Underwood and Paisley’s joke that President Barack Obama not caring about PPTSD contributed to Republicans winning the U.S. Senate on Tuesday, drawing strong cheers from the audience.

“If you were looking for ‘Black-ish’ tonight, yeah, this ain’t it. In the meantime, I hope you enjoy White-ish,” Paisley said about the mostly white world of country music.