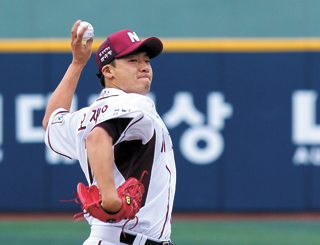 
The runner-up Nexen Heroes and three-time defending champion Samsung Lions split the first two games of this year’s Korean Series in Daegu, before taking a day off yesterday ahead of Game 3 tonight at Mokdong Baseball Stadium, western Seoul.

Jang will have an added incentive because he made his KBO debut with the Hyundai Unicorns, considered to be a predecessor of the Nexen Heroes. The team disbanded after Jang’s rookie season, but he played two more years with the Woori Heroes, whose roster included most of the players and coaching staff of the Unicorns.

Jang was traded to Samsung after the 2009 season, when the team was renamed the Nexen Heroes. 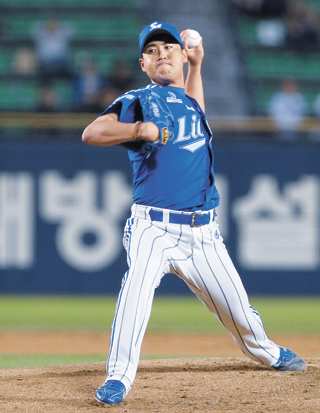 Jang has been Samsung’s ace left-hander, though he is coming off a sub-par season year in which he posted an 11-5 record and a 4.11 ERA. Opponents batted .295 against him and he allowed 1.44 walks plus hits per inning, frequently struggling after the fifth.

However, Jang was tough on Nexen, going 2-1 against the Heroes during the regular season. He had a 2.70 ERA over 20 innings and held Heroes hitters to a .208 batting average. Notably, he did not allow a homer by the Heroes at Mokdong Baseball Stadium, when Nexen’s hitters thrived this season.

On the hill for the home team will be Oh Jae-young, perhaps not the most preferable option based on statistics. He made 21 appearances during the regular season, 14 as a starter, compiling a 5-6 record and a 6.45 ERA. As a starter, he went 4-6 with a 6.03 ERA.

And Oh’s numbers get worse against Samsung: four innings pitched, one loss, a 27.00 ERA and .565 opponents’ batting average.

Despite his poor performance against the Lions, Nexen’s manager and staff must have been impressed by his Game 3 effort in the second round of the postseason. Oh seemed to have regained his form, going six innings against the LG Twins and allowing only one run.

The Lions evened the series on Wednesday by beating the Heroes, 7-1. With Samsung leading 1-0 in the second inning, Yamaico Navarro hit a two-run home run, his second after another in Game 1. Then Lee Seung-yeop added a two-run homer in the third and Lee Ji-young doubled in a run to make it 6-0.

Nexen’s Park Byung-ho, who led the league in home runs this year, hit a solo shot in the fourth, but Nexen couldn’t capitalize.

Though Nexen lost in Game 2, a bright spot for the team was the performance of underhand reliever Kim Dae-woo, who allowed only a hit from the third inning through the sixth.

In the opener on Tuesday, Nexen beat Samsung, 4-2, with a two-run homer by Kang Jung-ho, who hit 40 during the regular season, second in the KBO to his teammate Park’s 52.