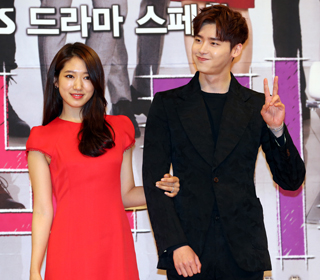 Actor Lee Jong-suk of “I Hear Your Voice” (2013) and actress Park Shin-hye of “The Heirs” will pair up for an upcoming drama series titled “Pinocchio.”

The two showed up for a press event prior to the airing of the drama series yesterday at SBS headquarters in Mok-dong, western Seoul.

In the new project, both Lee and Park will play the role of newbie reporters who cover social news but who have very different backgrounds.

Lee’s character, Choi Dal-po, is a smart guy who is excellent at memorizing things but pretends to be clumsy to appear more like his stepfather’s biological son.

His stepfather rescued Dal-po from drowning as a child and mistook him for his own.

In order not to let his stepfather down, Dal-po takes on the character traits of the original son. He flunks school, doesn’t appear to care about what he wears and also gives up going to college, but later happens to join a newsroom and exerts his potential there.

Because of the character, Lee wears a bushy wig in the early episodes of the drama.

“I was really surprised to see myself wearing the wig because I was really ugly,” said Lee during the press event.

“This role is not suitable for good-looking actors,” he continued with a laugh.

Meanwhile, Park’s character, Choi In-ha, becomes a reporter because she is suffering from a syndrome called “Pinocchio.”

Once she starts lying, she begins to hiccup continuously, which affects her choice of career.

“I think I’m so lucky because I’ve been working with top actors so far,” said Park.

The first episode of “Pinocchio” will air on Wednesday.