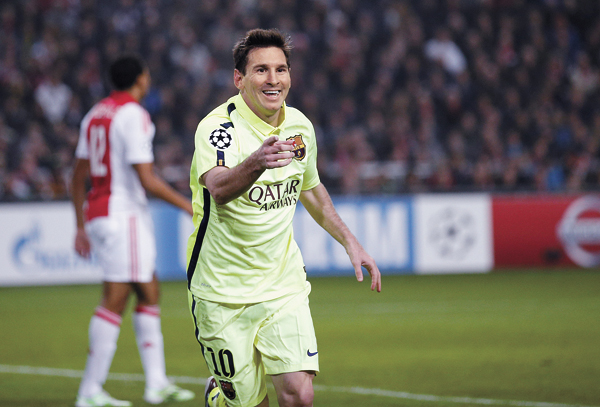 Messi scored his 70th Champions League goal in the 36th minute with a soft header after Ajax failed to clear a free kick and linked with substitute Pedro Rodriguez for his second on the night in the 76th.

The win assured Barcelona of qualification for the knockout stage of Europe’s top club competition as Paris Saint-Germain beat APOEL Nicosia 1-0 to stay atop Group F.

Ajax played the last 20 minutes with 10 men after defender Joel Veltman was sent off for his second yellow card. Veltman also was red carded last year when Ajax beat Barcelona 2-1 in Amsterdam.

“The record wasn’t the goal for today, that was the three points that qualified us for the next round and that’s why we are leaving feeling happy,’’ Messi told Canal Plus television.

“We played against a team that plays football well and, if you let them, can move you from one side of the pitch to the other. It was difficult for us to pressure them because of their mobility, but we took advantage of the chances we got.’’

“Messi is absolutely the best player I have ever seen,’’ said Barcelona Coach Luis Enrique.

His strikes came a night after Cristiano Ronaldo, who has scored 70 Champions League goals, failed to find the net in Real Madrid’s 1-0 victory over Liverpool.

Ajax had the best of the early exchanges and Lucas Andersen shot just wide in the 18th minute after a surging run by 19-year-old winger Anwar El Ghazi.

Andersen, Lasse Schone and El Ghazi all stretched the Barcelona defense as Ajax piled on the pressure, but Frank de Boer’s team could not convert its possession into a goal and Barcelona made them pay.

“We made a game of it in the first half,’’ De Boer said. “It’s a shame we weren’t rewarded for our good play.’’

Jasper Cillessen did well to save a 35th-minute Messi free kick but Ajax failed to clear and center back Marc Bartra hooked the ball back into the area for Messi to score with a soft header that Ricardo van Rhijn just failed to clear off the line.

Neymar almost doubled Barcelona’s lead five minutes after the break when he shrugged off two defenders but his shot struck the outside of the post.

Messi showed he is more than just a goal scorer when his perfectly weighted through ball put Luis Suarez one-on-one against Cillessen but the former Ajax striker shot straight at the goalkeeper and Messi’s rebound shot curled into the side netting.

Suarez was playing his first Champions League match for his new club since serving out his long suspension for biting Italy defender Giorgio Chiellini at the World Cup.

But this night was all about Messi.

After Veltman was sent off, the Argentina star ruthlessly exposed the space in Ajax’s back four as he played a one-two with Pedro and slid to poke the ball past Cillessen for his record-equalling goal. AP