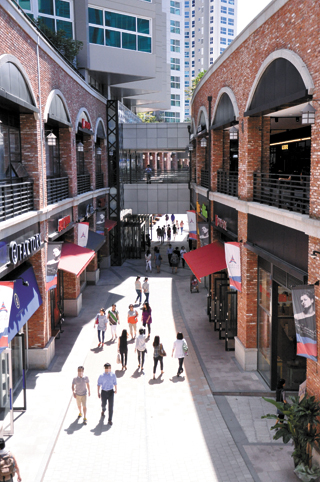 Whenever Lee Min-kyung, 34, has a hankering for caramelized apples and handmade chocolate - the treats she used to enjoy as a student in the United States - the Seocho resident simply heads over to Avenue France, a shopping arcade in her apartment complex. Other than the shop at her apartment building, the Hoban Summit Place, the four other chocolate stores that carry Lee’s favorites are all located in department stores.

Shops within apartment complexes are changing, transforming from on-the-go businesses to go-to shopping areas. Stability, which has been a concern for investors, has also enhanced.

Take Karim Avenue Dongtan, another store complex in Bando Ubora Ivy Park 4.0 apartments in Hwaseong, Gyeonggi. Within a week, 90 percent of the store had been purchased. At Tteurak in the Deoksugung Lotte Castle apartment complex in Jung District, central Seoul, 1,793 investors have bid on 56 stores.

The rising popularity of commercial investments in apartment complexes has also affected where stores are located. Whereas stores traditionally occupied the lower floors of apartment buildings, they are now separated from the apartments, making them easier for outsiders to see and access.

The Sharp Central Park II in Songdo, Incheon, Gyeonggi. Provided by the company

Moreover, stores that now proudly display themselves out front have changed the services they provide. Instead of laundromats, supermarkets and hair salons, there are now well-known chain restaurants, clothing shops and accessory stores. Unique shops that occupied Garosu-gil in Sinsa-dong, southern Seoul, Gyeongnidan-gil in Itaewon and Cafe Street in Jeongja-dong in Bundang, Gyeonggi, are now moving closer to people’s homes.

“When high-end businesses come in, the stature of the commercial district rises, which helps boost the number of visitors as well as the duration of their visits,” said Kwon Kang-soo, director at Korea Establishment Realty Agent.

Also, the appearance of the retail zones is changing. Increasing numbers of commercial zones result in “shopping streets,” and Avenue France is one such example.

“The shopping areas are built in a street format, so it’s possible to shop and drink tea as if I’m taking a stroll in Europe,” Lee said. “And it’s quite exotic, with distinct restaurants and fashion stores.”

Woomi Construction will build its commercial area within Buldang Woomi Lynn Central Park apartments in Cheonan, South Chungcheong, in a style that resembles European streets. A two-story shopping plaza will be constructed along a 450-meter (492-yard) street, connected to a 40,000-square-meter (10-acre) park.

Some complexes have terraces, like The W Square within the The W apartments in Nam District, Busan. Most stores in The W Square will have terraces where people see the beach. With the terraces, the net area increases and its uniqueness makes it easier to lease the stores, said Kim Seung-seok, president of SnB, a real estate consulting company.

Others are designed by internationally-known architects. Karim Avenue Sejong was designed by Karim Rashid. The store complex in Bando Ubora Ivy Park 4.0 apartments was designed by Rashid and Mori Building, a Japanese company that built Roppongi Hills and Shanghai World Financial Center.

Likewise, the distinct trend of the shopping areas within residential apartments has fed the demand for commercial real estate.

“In order for commercial districts to thrive, there should be great demand, and the recent rebound of housing preorders and the apartment market is a positive impact on the commercial market,” said Lim Chae-woo, of KB Kookmin Bank.

According to Ggi Auction, last month’s auction price rate (the bidding price as a percentage of the assessed value set by the Korea Appraisal Board) for commercial property was an average of 68 percent nationwide, an 11.3 percentage point increase compared to November last year.

Land prices also are on the rise. The Korea Land and Housing Corporation, also known as LH, sold 1,348 sites worth 546.6 billion won ($500 million) this year through October. During the same period last year, 692 sites were sold for 220.1 billion won.

The apartment preorder businesses also is actively securing land for commercial projects. LH sold 2.66 trillion won worth of commercial and industrial land this year through September, 68 percent more than the same period last year. According to a survey by Real Estate 114, commercial buildings open for preorders increased 82 percent nationwide, from 28 in the first half of last year to 51 in the same period this year.

“These commercial buildings have more expensive land prices compared to commercial areas within residential areas, so their price has to be higher,” said David Kwang-min Bae, CEO of Wirye SPC, developer of I’On Square in Wirye New Town.

“The comparably cheaper commercial zones within apartments are trending the investment fever in all kinds of commercial areas.”

This, however, doesn’t mean investors looking into commercial zones have loads of options. When it comes to commercial areas adjacent to residential complexes, only a portion is for sale, because preorder businesses hold onto the remainder in order to lease it.

NeoValue, the developer of Wirye IPark Avenue, retains 40 percent of the units in the commercial district. The company, which is also developing apartments for 2015 in Gwanggyo New Town and Galmae Zone in Guri, Gyeonggi, plans to open 20 percent of each store area within the residential complexes. Bando Construction owns 15 percent of the stores in Karim Avenue Dongtan and Karim Avenue Sejong. As for Pangyo World Square’s commercial areas, half of all store lots are owned by the developer, MDM.

Then preorder companies rent the stores, mostly to popular franchise brands. These businesses often want low fees for large areas, making it hard for retail investors to attract them.

“If the companies have their share [in the commercial areas], they will continue to manage and operate responsibly even after construction,” Son said.

Like other shopping malls, commercial areas within apartments fluctuate in their investment outcome depending on economic situations.

“Although the rent for business targeting residents in the apartments [like supermarkets] may not be high, they tend to produce stable income. Stores that carry accessories or clothing are usually affected by the economy and could result in volatile earnings from the lease,” said Coldwell Banker K-Realty’s general manager, Park Dae-bum.

Because the sales vary with foot traffic rather than demand coming from the adjoining apartments, the sites are crucial. Having bus stops or subway stations or parks nearby benefit the stores, while the proximity to central commercial areas is likely to increase competition and decrease sales.

“Even within the same store complex, earnings rates vary depending on location,” said Commercial Area Information Research Center head Park Dae-won, “so [investors] should look out for the flow of customer traffic and take the type of industry coming in into account.”