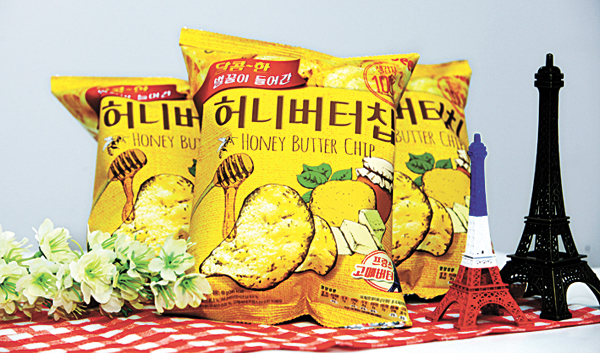 
The domestic confectionery market has seen declining sales in recent years as consumers move to healthier alternatives. However, a series of hit products is reviving the snack industry, led by Haitai-Calbee’s Honey Butter Chips.

A snack item is considered a success if its monthly sales exceed 1 billion won ($929,000), and 5 billion won of Honey Butter Chips was sold in October, three months after the product was introduced.

Haitai-Calbee added a third shift at the factory to keep up with demand.

It has become the most popular snack item at convenience stores CU and GS25 in terms of units sold.

The snack consists of potato chips with a butter-honey glaze. Most potato chips typically are salty and spicy, but Honey Butter Chips are sweeter.

Another hit is Lotte’s Malang Cow soft candy, which was launched in December with no advertising or print promotions. Nonetheless, the candy has generated 17 billion won in sales.

Its selling point is that it is doesn’t stick to teeth. A number of bloggers also gave Malang Cow a boost by posting how much they enjoyed the candy. It took off when one web user said the candy even tastes good boiled.

“Consumers are looking for different tastes,” said Moon Jeong-hoon, professor of agricultural economics and rural development at Seoul National University. “So if they spot a snack package that has a different flavor, they will likely try it.”

In 2012, confectionery industry sales revenue increased 3.5 percent, but the number of items sold fell 1.1 percent compared to a year ago.

“We are aiming to achieve 10 billion won in sales by the end of this year,” said a representative of Haitai-Calbee. “It’s really a rare case that a snack item pulls out such a growth and sales.”