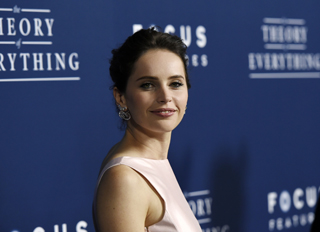 Cast member Felicity Jones poses during “The Theory of Everything” premiere in Beverly Hills, California, in this Oct. 28 file photo. The film, based on Jane’s memoir, opens this weekend in select U.S. theaters.[REUTERS/NEWS1]

Eddie Redmayne may be up for a best actor Oscar for his turn as British astrophysicist Stephen Hawking in “The Theory of Everything,” but he insists the “biggest privilege” of the film for him was working with co-star Felicity Jones.

Jones plays Jane Hawking, the scientist’s sweetheart from university days who agrees to marry him even though he is diagnosed with motor neuron disease and given two years to live. The film, based on Jane’s memoir, opens this weekend in select U.S. theaters.

“She’s a charismatic, brilliant match and that is what makes their relationship so great,” said Redmayne of Jane. “And Felic just brought all the subtlety and dignity and clarity to that.”

Jones’ performance has earned positive reviews and spurred talk of a best actress Oscar nomination. The 31-year-old English actress spoke to Reuters about meeting Jane Hawking, the attachment to the characters and the emotional milestone.

Q. Your director, James Marsh, says you and your character had to be the equal to Eddie and Stephen. How did you do it?

A. It all started with Jane. I met her early on in the process and I liked her instantly. She had such a warmth, such an interesting character, someone who just had layers and layers of strength and determination. So there was a lot for me as an actor to play.

The moviegoing public knows Stephen, but Jane is the unknown element of the story. How important was it for you to emulate her physical appearance and voice?

Oh, that was vital. I wanted to be true to who Jane was and her essence. And for the story to make sense, being close to the truth is always the best thing to do. There was an eccentricity about her that I really liked. She does have this very high-pitched voice and I worked with a dialect coach and she called it an “above the breast voice” because [Jones raises her pitch] everything is high in the head and it comes out here. She had quite a ’50s intonation. So it was just trying to capture who Jane was as truthfully as possible.

How difficult was filming the “break-up” scene between Jane and Stephen?

That was a very heavy day. It was toward the end of the shoot and in some ways for us as actors it was a traumatic day. We had got so used to these people, we had inhabited them for so long that to know that not only were we finishing filming, but also we were showing the moment when this incredibly complicated, complex union between two people was disintegrating. It was emotional both for us as actors and for the characters.

You subtly age over time and at the end even have a crepey neck. What was the process?

It was important to show how Jane did shift, and obviously you change so much over 25 years. There is this substance called Stipple and you just put it around your eyes and certain areas. It is like a glue and you scrunch up the area and it holds the lines in it.