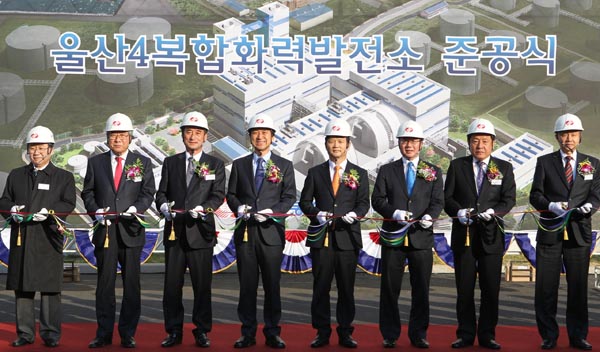 Guests cut the tape to celebrate the completion of Ulsan’s No. 4 Combined-Cycle Power Plant. Fourth form the left is Kim Ki-hyun, the mayor of Ulsan, fifth is Chang Joo-ok, the CEO of EWP, and sixth is Chae Hee-bong, a director of energy policy at the Ministry of Trade, Industry and Energy. Provided by the company

Korea East-West Power (EWP), a subsidiary of the Korea Electric Power Corporation, celebrated the completion of its fourth combined-cycle power plant yesterday at its headquarters in Ulsan.

Using its two gas turbines and a steam engine, the plant can generate a yearly amount of 5,813 gigawatts of electricity per hour, which covers about 20 percent of the energy consumption of the city of Ulsan. It also has a capacity of 948 megawatts.

Equipped with a high-tech desulfurization and denitrification system and high-efficiency generators that are 1.8 percent more efficient than existing combined-cycle generators, the power plant has the ability to reduce 51 percent of its emissions.

Its excellent performance was recognized last September when the plant received recognition from the Top Plant Awards from Power Magazine, an American magazine covering the power industry. Last year, the plant was also selected as the Project of the Year by the Korea Project Management Association.

Ulsan’s fourth power plant was planned in 2011 by the government to prepare for the rise of electric consumption in 2013 and 2014. EWP took preventive safety measures to make sure no accidents occurred during construction and the results were a success: no injuries were reported when the plant was being built.

The completion ceremony was attended by Ulsan residents, company employees and dignitaries including Chae Hee-bong, a director of energy policy at the Ministry of Trade, Industry and Energy, Kim Ki-hyun, the mayor of Ulsan, and Chang Joo-ok, the CEO of EWP.

“Ulsan No. 4 Combined-Cycle Power Plant is built with the best facilities for a high efficiency and least possible pollution for the environment of the nearby area,” said Chang.

“Korea East-West Power will continue to take responsibility as a member of the community and supply energy to the nation.”