Incheon airport CEO up for the challenge

Incheon airport CEO up for the challenge 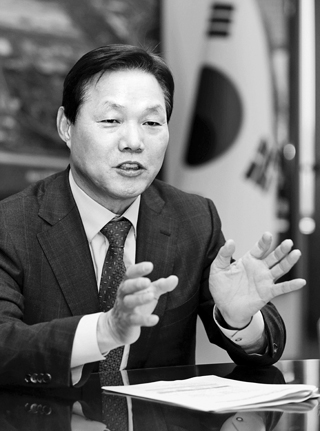 
It has been a difficult year for Incheon International Airport, Korea’s flagship hub, due to internal and external factors.

The airport has seen an increase in connecting passengers so far this year compared to last year, due in part to Japan’s recent expansion of its international terminal at Haneda Airport in August and China’s increase in direct international routes to the Untied States and Europe.

Domestically, Incheon airport is also faced with growing competition from the smaller Gimpo International Airport, which has long been looking to expand its international routes.

But these are just some of the issues that Park Wan-su is facing as Incheon airport’s new CEO. The former mayor of Changwon, South Gyeongsang, was tapped to fill the position last month.

Having spent most of his career as a public servant within the South Gyeongsang provincial government, Park doesn’t have much experience in the aviation industry, but he said he hopes to solve the crises facing the country’s largest airport by drawing on his experiences in local government.

Q. Are there any ways to respond to the challenges presented by foreign airports?

A. During my term, I would like to change our corporate constitution to become more aggressive by making our employees prioritize goal completion instead of everyday tasks.

Incheon airport also has to expand long-distance flight routes, which only account for about 30 percent of our total routes, and forge contracts with more low-cost carriers [LCCs]. To achieve this, we need a terminal and maintenance cargo port just for LCCs.

The government should reconsider the Gimpo airport’s international route-expansion strategy after carefully looking at the big picture. How can they help the entire Korean aviation industry grow and boost the strengths of all Korea’s airports?

The issue is not whether Gimpo and Incheon should compete. … Airports nationwide should launch international routes. In reality, this is impossible with a limited budget. I think it is more realistic and efficient to make Incheon International Airport the hub and look for ways to better connect other airports with Incheon.

Terminals at Incheon are already saturated.

The second terminal is currently under construction, and 14.4 percent has been completed so far. The new terminal will be complete by March 2017 and will complete test-operation by September that year.

Before then, travelers must put up with some inconveniences, especially during peak travel seasons. We will try our best to ease the entry and departure processes by installing self check-in machines across the terminal.