Review is launched for budget bill for next year

Review is launched for budget bill for next year 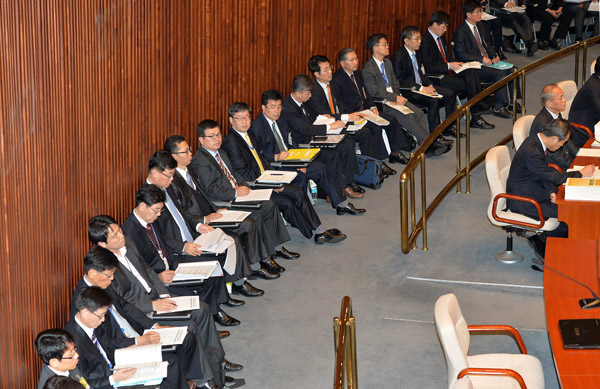 Government officials yesterday stand by along the backside of a conference hall in the National Assembly, where lawmakers deliberate on the budget bill for the next fiscal year. [NEWS1]


The National Assembly yesterday launched a review of the draft budget for next year, which amounts to 376 trillion won ($347 billion), with just 25 days left before the Nov. 30 deadline for the bill to be put to a vote.

The special committee for budget evaluation under the Assembly held the first general meeting for the review. Respective standing committees - for agriculture, food and rural affairs; environment and labor; and science, ICT and future planning - also entered into the review process.

Under recently adjusted Assembly rules, if the budget bill review is not finalized by the end of November, the draft crafted by the government will be automatically submitted to the plenary session on Dec. 1.

The rules implemented last year, known as the National Assembly Advancement Act, are intended to prevent any one political party from dominating the opposition through a simple majority. A bill requires the consent of three-fifths of lawmakers before it can be put up for a vote.

However, the bill’s passage is likely to face a bumpy road ahead given that the ruling and opposition parties have different stances on its deadline and method of review.

The ruling Saenuri Party has prioritized dealing with the evaluation by the designated deadline, while the main opposition New Politics Alliance for Democracy (NPAD) only stated that it would “do its best” to abide by the time limit but would not handle the review in a hasty manner.

The ruling also made clear its support for a “super expanded budget” for next year - which would be 5.7 percent greater than this year’s in the hopes that the extra funds would invigorate the national economy.

The NPAD, however, is already poised to put the brakes on such an extravagant budget, which risks a 33 trillion won fiscal deficit and would propel government debt upwards of 570 trillion won in 2015.

NPAD Rep. Min Byung-doo claimed during the meeting that, out of the 347 new businesses proposed by different ministries, 41 businesses, whose cumulative value stands at 525.1 billion won, are problematic.

“The majority of the budget expansion for next year originates from an increase in funding for businesses that already exist,” he said. “Feasibility and profitability reviews for existing businesses are crucial.”

Meanwhile, two out of three bills related to the Sewol ferry tragedy were approved yesterday by the standing committee for agriculture, food and rural affairs, paving the way for lawmakers to vote on them in the plenary session today. The third bill will be discussed today.

The first concerns the launch of a special investigation into the April 16 disaster, while the second proposes punishments for those who conceal illegally accumulated financial gains. The third to be discussed today would address government restructuring.

The second bill is set to be named after Yoo Byung-eun, the late patriarch of the family that owned the Sewol ferry, who stood accused of embezzlement, tax evasion and corruption.