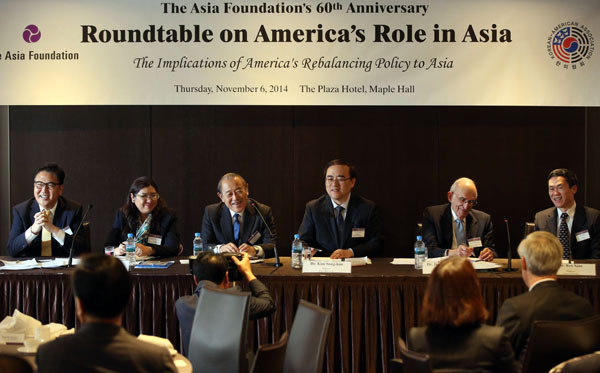 Panelists discuss enhancing relations among nations in Northeast Asia and the United States during a 60th anniversary commemoration for the Asia Foundation yesterday at the Plaza Hotel, central Seoul. From left: Former lawmaker Park Jin, Prof. Aileen Baviera of the University of the Philippines, former Japanese Ambassador to the United States Ichiro Fujisaki, Kim Sung-han of Korea University, David Steinberg of Georgetown University and Ren Xiao of Fudan University. By Kim Kyung-bin

The importance of fostering a “Pacific community” in which neighbors in Northeast Asia and the United States construct “inclusive security and economic institutions” was stressed yesterday during a roundtable discussion hosted by the Asia Foundation.

Noting the term “Pacific community” was first used by former U.S. Secretary of State Henry Kissinger, David M. Lampton, chairman of the Asia Foundation, said in his keynote speech that Korea, the United States, China and Japan should all become important members in such a community that embodies “inclusive security and economic institutions” despite regional tensions shared by Japan, Korea and China, some caused by different interpretations of modern history.

“We all can see the difficulties of realizing this,” said Lampton, referring to a fourth vision of the Pacific community.

“But the only thing more difficult than pursuing this vision is accepting all the conflict and opportunity costs that we inevitably will face if we go down any of the other paths.”

The discussion among veteran diplomats and scholars was part of an event held at the Plaza Hotel in central Seoul yesterday commemorating the 60th anniversary of the founding of the Asia Foundation, the San Francisco-based organization that has strived to develop and sustain social and economic ties among regional players in the Pacific, including the United States, since its inception in 1954.

The nonprofit organization opened its Seoul branch in 1954 and helped Korea achieve social, economic and political transformations since then.

The main topic in the discussion was Washington’s rebalancing to Asia, or what is generally known as the “pivot to Asia,” championed by the Barack Obama administration after years of the United States’ costly wars in Iraq and Afghanistan.

Hong Seok-hyun, chairman of the JoongAng Ilbo and JTBC, delivered remarks celebrating the anniversary. Hong joined the 60-year-old organization in 2013 as a member of its Board of Trustees.

“The experience the Asia Foundation has accumulated over the past six decades makes it a formidable institution offering invaluable advice and support to those throughout Asia working to build a better future,” said Hong.

He said the institution “addressed the pressing issues of food and shelter” and “started long-term plans to build infrastructure, systems of governance and bring a sense of hope” to Korea after it was devastated by the 1950-53 Korean War.

Mark Lippert, the new U.S. ambassador to Korea who arrived in Seoul last week to succeed Sung Kim, also attended the function commemorating the anniversary with his wife Robyn.

While participants agreed on the need to forge an inclusive institution such as the European Union, Ren Xiao, who teaches Internal Politics at Fudan University in Shanghai, said suspicions were common in China about the U.S. pivot policy.

“For many Chinese analysts, quite a few problems that emerged in China’s neighborhood are related to this strategy,” said Ren.

He said Chinese scholars believe that U.S. involvement in Beijing’s maritime dispute with the Philippines, as well as with Japan over territories, has led to increased mutual distrust between the two nations.

“[Some in China] think that Washington has taken actions attempting to counterbalance China and its influence,” he said.

He cited a prediction that China will “overtake the U.S. to become the world’s largest economy” and said that as a result, the Untied States will be in a position where “the spirit is willing but the flesh is weak” in its dealings with a resurgent Beijing.

Prof. Park Jin of Hankook University of Foreign Studies also acknowledged challenges to regional cooperation due to historical and territorial disputes among Korea, Japan and China.

“Meanwhile, high tensions and instability continue to be the status quo in various parts of the Asia-Pacific such as the East China Sea, South China Sea, the Taiwan Straits and the Korean Peninsula, just to name a few,” Park said.

Park went on to say the “absence of close strategic coordination in Asia” has hindered some progress of Asia despite “its enormous potential.”

During a question-and-answer session, Lee Hong-koo, prime minister in the Kim Young-sam government, questioned what he described as reluctance by Beijing and Washington to lead the way in resolving the gridlock over North Korea’s nuclear program. He called their behavior “very strange” considering their influence in the region. Lee said Beijing and Washington seem content with the status quo on the Korean Peninsula and wish to “keep the current situation as long as there is no war.”

David Steinberg, professor of Asian studies at Georgetown University and a senior consultant to the Asia Foundation, said this may be because Chinese officials firmly believe North Korea will “never use its nuclear weapons against it.”