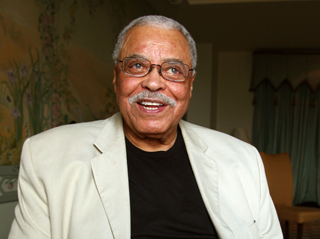 NEW YORK - Darth Vader, Mufasa, and even the tagline for a certain 24-hour news network helped make James Earl Jones one of the most recognizable voices on the planet, and soon the recipient of the first Voice Icon Award.

But according to the actor, there was a period when he didn’t do much speaking.

As a child he suffered from a severe stutter, and went through a period where he refused to speak at all.

“I once did not speak. I was mute. When I finally did speak, though, I spoke as an adult,’’ Jones said of the transformation.

Once speaking, Jones attributes his teacher for providing valuable advice that would carry him throughout his long career.

“I was 16 or 17, and my teacher said, `You remember yourself speaking as a child, you’re now hearing yourself as an adult, don’t get impressed with it. Don’t listen to it, because you can fall in love with the melodiousness of it. If you listen to it, then nobody else will,’’’ he said.

That advice paid off as the Tony-winning and Oscar-nominated actor became the initial recipient of the Voice Icon Award from the first-ever Voice Arts Awards yesterday.

Sponsored by the Society of Voice Arts and Sciences, this new annual event honors the best voices of the year from television, film, video games, commercials, and audiobooks.

“There is magic in the human voice,’’ an elated Jones told The Associated Press. “And I’m honored.’’

While Jones treats all of his voice characterizations with equal love, there are a few that stand out.

One of them is Mufasa from Disney’s ``The Lion King.’’

“I found myself as an adult watching it with great interest and great involvement. When Mufasa died, I understood Simba breaking down and crying because Daddy is gone. ... That had an effect on me, that film.’’

Then there’s the iconic CNN tagline. He likes that one after learning of its impact overseas.

“The time I was most proud of that was during the first Iraq war. Fliers would come back to base; they would mention that once they got inside and they heard, `This is CNN,’ they knew they were home, or a piece of home. I’m very proud to represent that.’’

But when asked about Darth Vader, and if there was truth to the rumor that Jones would reprise the role in a flashback capacity in the upcoming “Star Wars’’ film, Jones mischievously laughed it off, saying, “Oh, Darth is dead. Darth is dead.’’ AP