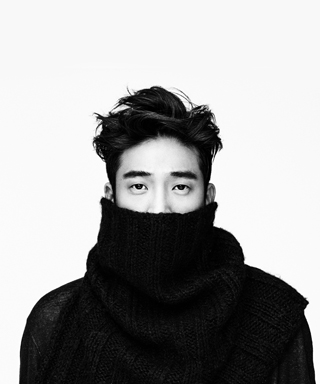 MC Mong was cleared of dodging his military service, but his comeback was still controversial.Provided by Wellmade Yedang Entertainment

Scandalized entertainers are returning to the spotlight one after another, receiving forgiveness from the public for their past indiscretions.

One example is actress Han Ye-seul, who is currently starring in the drama series “Birth of a Beauty.” She reappeared on the small screen three years after she fled to the United States in the middle of shooting 2011’s “Spy Myung-wol.”

Han said she left the drama because of its hectic shooting schedule, and with the sudden departure of its lead actress, the series was abruptly canceled. But now she’s back in the public eye.

Another actress, Park Si-yeon, has picked up a role in the drama series “The Greatest Marriage.” She recently returned to acting after she was found guilty of abusing the substance propofol last year. She was ordered to serve jail time for abusing the powerful anesthetic, which is illegal in Korea.

The entertainer Boom also resumed his career recently after it turned out that he had gambled illegally about a year ago.

MC Mong is also on the list of scandalized stars who are “breaking back” into the industry. The rapper, who was accused of dodging his military service by pulling some of his teeth out five years ago, was later cleared of all charges.

It seems the public still hasn’t fully accepted him, however, even though his music has been a huge success.

Upon the release of his new album last Monday, the title track “Did You Miss Me?” from his sixth studio album “Miss Me or Diss Me” topped nine major music charts. Other tracks from the new record also made it into the top 10 on nine best-selling music charts.

But the glory did not last that long.

On Nov. 3, the day the rapper released his album, the name MC Mong stayed at the top of Naver, the country’s biggest web portal, until noon on Monday. However, it was replaced with the title of the military song “Myeolgonguihwaetbul,” which roughly translates to “Torch for Anti-Communists,” later that day.

People who oppose MC Mong’s comeback typed the title of the military song repeatedly on Naver as a way to mock the entertainer and to push his name off the top spot for the most searched term. 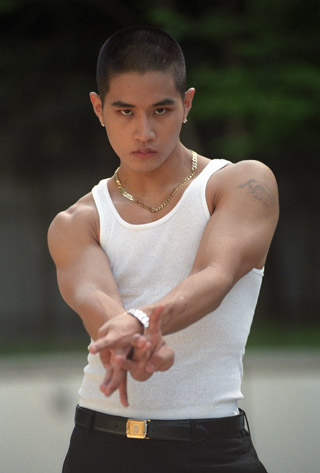 Singer Yoo Seung-jun was all involved in military scandals.[JoongAng Ilbo]

On Monday afternoon, the second most searched keyword after the military song was “Monni.”

Monni is the name of an indie band, but the search word was listed on Naver by the collective efforts of MC Mong haters who searched the word over and over again because it reminds people of “MC Mong’s teeth” in Korean.

Haha, a regular member of the popular reality TV show “Infinite Challenge,” became a target of these Internet trolls.

The entertainer tweeted, “My friend, I’ve been missing you,” a reference to MC Mong’s latest album’s title.

But many Internet users left notes of vitriol on the bulletin board of “Infinite Challenge,” commenting that “Haha should walk out of the TV show to take responsibility for his comments.” 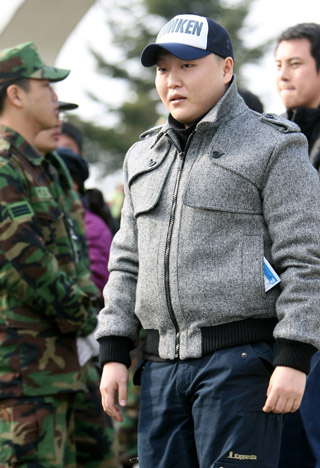 Responding to a series of controversies surrounding MC Mong, Chin Jung-kwon, a culture critic and a professor of aesthetics at Dongyang University, tweeted on Tuesday, “People can blame him, but it is too harsh to criticize other musicians who supported MC Mong. … Using the military song, which was heavily played under the military regime, doesn’t look good to me.

“I wish the public would be more generous to celebrities while being more strict on politicians,” he continued.

Celebrities who have been enmeshed in scandals involving drugs, sex, violence, illegal gambling and tax evasion have mostly all returned to the limelight successfully, but stars accused of avoiding the Army have had it particularly hard because draft dodging is a touchy issue in Korea.

The case of singer Yoo Seung-jun, also known as Steve Yoo, signifies this.

The well-built, Korean-American singer instantly became a star after debuting in 1997.

Although he had U.S. citizenship, Yoo said he would enter the Korean military as he thinks it is a requirement of citizens. He even underwent the medical checkup that is necessary to join the military.

In 2002, however, the singer, while at the height of his career, left for the United States and gave up his Korean citizenship.

The Military Manpower Administration placed a ban on him so that he could not re-enter the country.

The ban was placed to discourage other soldiers from following in his footsteps and remains valid to this day.

“Since we have mandatory military service, young men should all complete their military service whether they want to or not,” said Kwak Geum-ju, a professor of psychology at Seoul National University.

“Most men enlist when they are in their early 20s and have to give up on many other things. But when they see others who try to avoid military service by using their authority or fame, it enrages ordinary Korean men because they think it is a matter of fairness.”

She continued, “Looking at the recent deaths of young soldiers inside military camps, I feel the military culture is not catching up on the changed mind-set of young men.

“With the continuous deaths of soldiers, people, especially men and their parents, are bound to be super sensitive about military-dodging scandals [like the issue of MC Mong].”

After Yoo, many celebrities also attempted to avoid military service.

Actors Jang Hyuk of “Fated to Love You” and Song Seung-hun of “Obsessed” added protein substances into their urine, which signifies that the person in question has an illness, when they went through medical checkups for military enlistment.

But it was later discovered that they faked their urine tests and they completed their mandatory military service.

“Gangnam Style” star Psy also went into the military twice - deemed the worst nightmare for any Korean man. He initially served between 2003 and 2005 as a special soldier who worked for an IT company because he had a relevant certificate.

Psy completed his military service in this department, but it later turned out that he had earned money while serving by performing concerts during enlistment, which is illegal.

He eventually decided to re-enlist in the military in 2007 while his pregnant wife was due to give birth.

Since the military-evasion scandal has ruined entire careers, no matter how famous and popular a celebrity is, entertainment agencies advise their singers to enlist in the military as early as they can.

For example, seven out of nine Super Junior members have all completed their mandatory duty.

“Entertainment agencies used to delay the enlistment of their stars because they saw the military term as a huge blow to one’s career,” said an industry insider who didn’t want to be named.

“But many idol signers finish their military duties while the rest of the members are performing under the group because they know how dangerous it is to attempt to avoid it.”