Chelsea still on top after win against Liverpool

Chelsea still on top after win against Liverpool 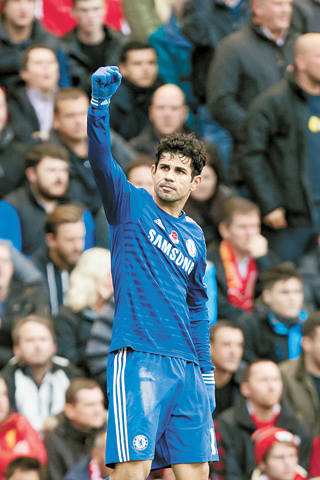 Chelsea’s Diego Costa celebrates after scoring during his team’s match against Liverpool at Anfield Stadium in Liverpool on Saturday. [AP/NEWSIS]

Chelsea passed another major test of its Premier League title credentials on Saturday, beating Liverpool 2-1 away to maintain a fierce pace at the top of the standings that defending champion Manchester City cannot live with.

City dropped eight points behind unbeaten Chelsea by drawing 2-2 at lowly Queens Park Rangers thanks to two equalizers from Sergio Aguero, who is the league’s top scorer with 12 goals.

Surprisingly, it is Southampton that is pushing Chelsea after 11 games, with a 2-0 win over Leicester leaving the south-coast club in second place and four points off the lead.

Diego Costa scored the 67th-minute winner at Anfield, capping a Chelsea comeback that started in the 14th when Gary Cahill canceled out a deflected opener from Emre Can.

“In the second half, we showed something new, which is to be 1-1 at Anfield and not accept the result as a good result and play to win,’’ Chelsea Manager Jose Mourinho said. “I think we were very impressive.’’

Elsewhere, Manchester United won 1-0 against Crystal Palace on Juan Mata’s goal to climb provisionally to sixth, West Ham drew 0-0 at home to Aston Villa and Burnley recorded its first win in the league this season - 1-0 against Hull.

At Anfield, Liverpool Manager Brendan Rodgers made seven changes from the side that lost 1-0 to Real Madrid in the Champions League on Tuesday.

His midweek selection was criticized as he appeared to prioritize the clash against Chelsea, and the gamble looked like it c+ould pay off as Liverpool took the lead when Can’s long-range strike deflected in off Cahill.

Chelsea equalized with a goal that required confirmation from goal-line technology, with Cahill blasting a shot from close range that goalkeeper Simon Mignolet saved before falling back over the line with the ball in his hands.

Costa’s winner came when he pounced on the rebound after Cesar Azpilicueta’s shot was parried out by Mignolet.

City fell behind at Loftus Road in the 21st when Charlie Austin converted from Mauricio Isla’s cross. Austin earlier had two goals disallowed, one for offside and one after scoring directly from a mishit free kick by goalkeeper Joe Hart.

Hart accidently kicked the ball twice before Austin found the net, and rules state a player cannot touch the ball twice successively from a free kick.

Aguero equalized after brilliantly controlling a long pass from Eliaquim Mangala, but an own goal from Martin Demichelis in the 76th restored QPR’s lead.

“Aguero had all the QPR defense in trouble whenever he had the ball,’’ Pellegrini said, while QPR manager Harry Redknapp was left ruing his side’s inability to hold on for victory.

“I really felt at 2-1 we would go on and win the game,’’ Redknapp said. “You can’t relax when they have got so many quality players in the team.’’