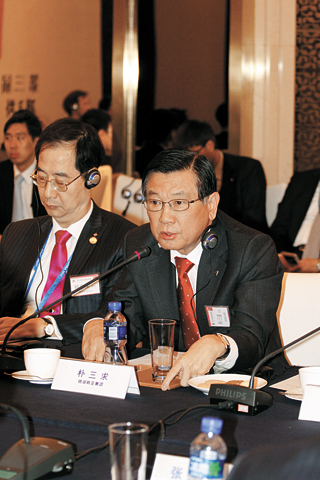 Kumho Asiana Group’s Park Sam-koo, right, speaks at a roundtable hosted by the Federation of Korean Industries and China International Council for the Promotion of Multinational Corporations in Beijing on Saturday. Provided by the company

Park Sam-koo, chairman of Kumho Asiana Group, called for future-oriented economic cooperation between Korea and China and stressed the need to finalize the Korea-China free trade agreement at a meeting of chief executives from major businesses in the two countries.

“It was a good opportunity for both sides to talk about measures to share profits with each other and prepare agendas that are highly likely to be carried out,” Park said after presiding over the meeting in Beijing on Saturday.

About 26 executives attended the Korea-China CEO Roundtable, co-hosted by the Federation of Korean Industries (FKI) and the China International Council for the Promotion of Multinational Corporations.

“Businesses from the two countries will do our best to establish a friendly partnership in various fields ranging from finance to communications to culture,” Park said. “This will be based on an effective free trade agreement between the two countries.”

It is the third time the meeting has been held and the second time Park has presided over it. He has served as the chairman of the Korea-China Friendship Association since 2005 and has met Chinese government officials including current President Xi Jinping, former President Hu Jintao and former Premier Wen Jiabao.

“The chairman is credited with playing a key role in expanding diplomatic channels in the private sector and increasing business and cultural exchanges between the two countries,” a statement from Kumho Asiana Group said.