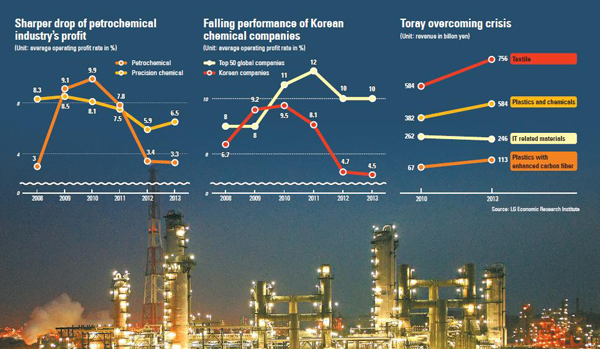 Winter innerwear is becoming a savior to the Japanese chemical industry and the biggest contributor is Uniqlo’s Heattech.

At the Japanese fast fashion store at the IFC Mall on Thursday in Yeouido Seoul, a huge crowd turned up after rumors spread that the store was offering 12,900 won ($11.80) short-sleeve Heattech innerwear for 9,900 won.

“As winter is closing in and thanks to the discount event, the number of customers surged more than usual,” said a store clerk.

Heattech, one of Uniqlo’s best-selling products for the past 12 years, started the heat-retaining innerwear fad.

But the business benefiting the most from the continuous popularity of this item is Toray, a Japanese chemical company.

Thanks to the popularity of Heattech, Toray’s operating profit rate in the textile business reached 7 percent last year. This is higher than the average global chemical companies’ profit rate of 5 percent.

“The success of Toray is a good example for Korean chemical companies’ top management to stop blaming overall economic sluggishness and China for their problems,” said Lim Ji-soo at the LG Economic Research Institute. “Unless top managers change their optimistic opinions that the market will recover if they can hold on for several more years, it will be a dark future for Korean chemical companies.”

Korean companies most often point to China as the cause of sagging sales, according to Lim, adding that’s only part of the story.

Since 2000, China has been the primary reason for the expansion of the global chemical industry. China’s influence was so huge that larger demand in China meant larger global demand. Demand for chemical products in China accounted for 21 percent of the global market from 2003-07 and 59 percent from 2008-12.

When global demand retreated 10 percent in 2009 after one of the worst global crises of recent years, China saw a 12 percent increase.

But since 2011, growth started to lose momentum and demand for chemical goods shrank.

However, Lim says demand for chemical products in China since 2012 has stabilized and therefore it’s difficult to conclude that less demand was the primary cause of Korean companies’ struggles.

“The global market has been growing 9 percent to 10 percent every year and only dipped to 7 percent to 8 percent in recent years,” she said. “It’s difficult to say the market itself is ‘sluggish.’”

Another factor Korean companies blame for their current struggles is the sluggish global market.

The researcher says if that were the case, other companies around the world would be having the same problem. But an examination of the revenues for the world’s top 50 chemical companies shows the situation in Korea is an isolated case.

Although it could be said that U.S. chemical companies are enjoying the benefits of shale gas and oil development, Japanese and European companies also have shown an improved performance in recent years.

“It’s not correct to say the global chemical industry itself is in trouble, because Korean companies’ worsening profit was the result of diminishing demand from the Chinese market in the past, while their corporate values failed to recover,” Lim said.

She said the problem is within the Korean companies themselves.

By macroeconomic indicators, the Korean chemical industry has enjoyed a favorable year in 2013, with exports of $61.2 billion and imports of $39 billion leaving a trade surplus of $22.2 billion. But a closer look shows a completely different story.

The global chemical business can be categorized into three sectors: petrochemical, which accounts for 46 percent of global business; new material chemicals, which takes up 45 percent; and inorganic chemistry with 9 percent.

However, Korean companies are heavily concentrated in petrochemicals, reporting a $31.4 billion trade surplus.

On the other hand, high-value precision chemistry businesses reported a trade deficit of $9.2 billion.

Additionally, last year the companies imported expensive materials like paint, ink and adhesives and display materials, whose import unit price exceeds $19,000 per ton. They imported a total of $2 billion in such materials, which accounted for 12 percent of the total.

Korean companies also fell behind in petrochemical development, which should be one of their areas of specialty, to Japan, the United States, Germany and others.

Lim said the crisis that Korean companies face today came from within.

Korean companies since 2012 on average have spent $2.1 billion on research and development, far less than $12.3 billion Europe spent. China during the same period spent $10.4 billion, after spending only $2.9 billion in 2006.

Korean companies invest 1.3 percent of their revenue on research and development, a stark contrast to the 4 percent investment of Japanese companies.

Toray is a Japanese company that started off as a textile manufacturer in 1926. Today, it has more than 7,100 employees and last year it saw revenue of 1.8 trillion yen (17.4 trillion won).

Last year, the company raked in 256 billion yen in the textile business, which many experts and market players consider an industry in decline.

The secret to the success of the Japanese chemical company was cooperation. Toray proposed working jointly with Uniqlo in 2000. The company set up a global operations office at its headquarters and started to develop the textile that Uniqlo requested. As a result, they were able to develop Heattech in 2003.

The new textile with high heat retention also led to the successful development of the fleece jacket. Its not the only textile that Toray is working on jointly as it is expanding product cooperation to other new materials, including plastics with strong carbon fiber.

It not only succeeded in partnering with airplane manufacturers Boeing and Air Bus, it went on to establish an automotive material solution center in 2008 and has been working with Mercedes-Benz on developing automobile parts.

In 2011, it was able to introduce its own developed concept car, the Teewave.

“If the only plan is to hold on like in the past, Korean chemical companies will loose their opportunities,” said Lim. “Before blaming it on the economy, the companies have to ponder on how they would strengthen their businesses from the very foundation and set the current struggle as the starting point for change and innovation.”