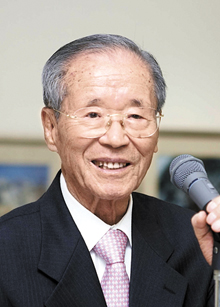 Lee Dong-chan, an honorary president of Kolon Group who helped lay the foundation for Korea’s rise from a war-torn, destitute nation into an industrial powerhouse, died on Saturday. He was 92.

Kolon said that Lee died of natural causes, and a funeral hall was set up at Yonsei University’s Severance Hospital in western Seoul.

Kolon Group started off as a nylon manufacturer under the name Hanguk Nylon in 1957 with the support of the state. It went on to become one of Korea’s first exporting companies in the 1960s, helping make Korea a major nylon exporter. In the 1970s, Korea’s share in the world’s nylon production was less than 1 percent but by 1993, it had become the fifth-largest exporter globally. As the first company to build a nylon plant, Kolon has had a lasting impact on Korea’s textiles industry.

At the helm of the company during the transitional period between the 1970s and ’90s was the late Lee.

After Lee’s father founded the textile company in Daegu, North Gyeongsang, in 1957, he took over in 1977.

Lee focused on value added product lines such as film, video tape and medical supplies in an effort to diversify Kolon’s portfolio. The 1980s saw the decline of the Korean textile industry due to stiff competition from developing countries and protectionism from developed countries.

The driving force behind the company’s pioneering status was Lee’s emphasis on innovation and his investment in research and development centers.

When he retired, the older Lee defended his decision, saying that the younger Lee deserves the position not because he was his son but because he was the most devoted worker at the company.

The late Lee was among the few business executives who was never involved in allegations of financial irregularities.

Lee was passionate about running on Kolon’s marathon team.

“The sport matches well with my philosophy,” he said in an interview, “because it’s not about the speed one can make, but more about the effort and perseverance one spends to reach the finish line.”

He served as head of the Korea Employers Federation in the late 1990s after his retirement.

He is survived by his son, Lee Woong-yeul, who now leads Kolon Group, and five daughters.