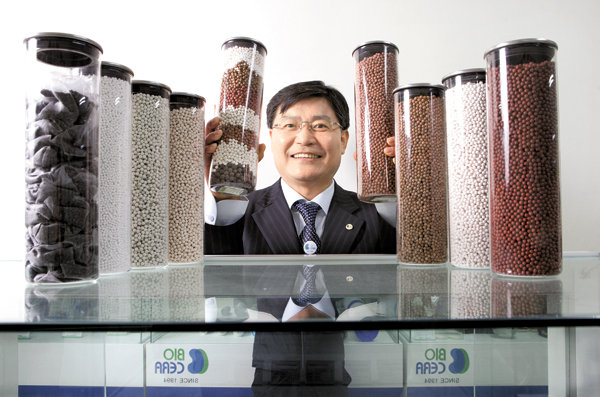 Jeon Hyoung-tag, CEO of Biocera, holds up the company’s ceramic balls, which are its flagship product, at its headquarters in Bundang, Gyeonggi. By Park Sang-moon

“I have the ability to do anything” is 56-year-old Korean entrepreneur Jeon Hyoung-tag’s mantra, both in life and business.

Jeon, who majored in inorganic material engineering, worked for a small ceramics company until early the 1990s. But a three-month course of expensive lectures on life - which cost him a full month’s wage - gave him the courage to launch his own business.

“To make myself happy and to make my family happy, this is what I am doing right now,” Jeon said. 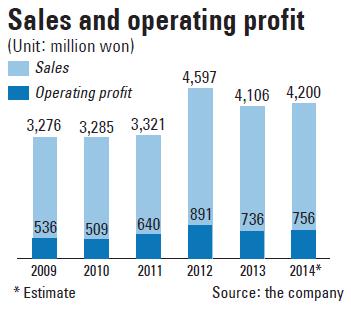 The entrepreneur came up with the idea for his business when his three-year-old daughter started suffering from atopic dermatitis.

“I studied and studied to find ways to cure my daughter. So this is not just a business, it is for my daughter’s happiness, my happiness, and also for everyone else,” he said.

As a business owner, Jeon felt he should keep learning and went on to earn both a master’s degree and a PhD in material engineering while running Biocera.

The CEO believes that commercial marketing doesn’t help with selling products. Jeon prefers speaking at seminars or offering lectures on the environment, health and happiness for his global buyers instead.

Every month, he flies to different parts of the world to spread his philosophy and to meet the people who purchase his goods.

The following is an excerpt from an interview the Korea JoongAng Daily held with Jeon.

Q. Could you elaborate on Biocera products?

A. We largely have three product lines: antibacterial-related, air-related and water-related products. One of the antibacterial agents is Biocera A. It is a non-toxic antibiotic agent that is harmless to the human body. Biocera A is known for its antibiotic and bactericidal ability and durability. You can add the agent to hand dryers, dish warmers, refrigerator linings, plastic food packaging, car gear, bedding, enamel, paint, cosmetics and others.

One of the most famous is the laundry washing ball. You put this ball in your washing machine and do not use any detergent. The Biocera Washing Ball has excellent antibacterial effects that eliminate bacteria and mold. It is designed just like a ball in order to minimize the damage on the laundry. Inside the ball, there are hundreds of ceramic balls that have the ability to absorb impurities and harmful heavy metals, helping human metabolism and encouraging natural healing.

Why do you emphasize the idea that water is so important for humans?

Water is a basic necessity and one of the most important resources for the existence of all creatures on Earth, whether animals or plants. This is not only because the human body is comprised of about 80 percent water, but as trillions of cells in an organism cannot grow, reproduce and function without water. This implies that the quality of water can either heal or harm us. Without good water, human beings cannot be healthy.

When a person drinks water, it reaches our blood and brain in less than a minute, our skin tissue in 10 minutes and kidney, and liver and heart in 20 minutes. In water circulation, minerals take the most important role. The different minerals in water flow through blood vessels and enable organs to function properly.

Was it just a whim that you decided to create your own business?

I’ve thought of having my own business since I was young. I had the goal of opening a company at 44. But somehow, the chance came earlier than I expected, at 36. After learning from the lectures, I said to myself every day that I could do everything. I came to experience that what I said just tended to happen magically. Then I got this habit of telling people that if you are healthy and happy then you can do everything, including making other people happy, too.

You seem more active overseas than in Korea. How much of your sales come from exports?

About 70 percent of my total sales are made abroad. It is very difficult to run an environment-related business in Korea. Many consumers in Europe first showed a good reaction to the Biocera washing ball, because I think there are many people suffering from atopic dermatitis there. Rather than just doing PR for our products, I prefer giving seminars on health and the environment. Because I couldn’t speak English fluently I was rejected by American buyers at least three times. But I kept trying. Once they listen to my seminar, they understood who I am.

What have been your most difficult experiences running the business?

As I said before, it is very hard to run an environmental business. After the washing ball became a big hit in Europe, it gained popularity in Hong Kong. There many copycats of the Biocera washing ball. And a sad thing was that big European detergent companies didn’t want us to be in the market. A German detergent company broadcast that its detergent was better than the washing ball. A number of my products were recalled as a result. A Hong Kong buyer’s son committed suicide and the buyer also shut down their business. It was too awful. Even in Korea, I cannot think of selling my products on home-shopping channels because of some conglomerates. Since there are so many detergent products being sold on those channels, producers say it seems contradictory to consumers to sell both types of products on the same channel.

What is the differentiated strategy of Biocera compared to other similar businesses?

I don’t think there is a big difference in technology. In the competitive smartphone world, Apple and Samsung do have neck-and-neck technological capabilities. What makes us different is our sense of duty. We are fully dedicated to improving the environment and health. That’s it. As for the creative economy initiative, I have the same opinion. There is nothing new under the sky. Earth already has everything. What we do now is just combine different things that we have never thought of. I don’t think creativity is making something up. Rather it used things that we already have.

* 2003: Graduated with Ph.D in metal engineering from Chonbuk National University