Will beacons be the next big retail strategy?

Will beacons be the next big retail strategy? 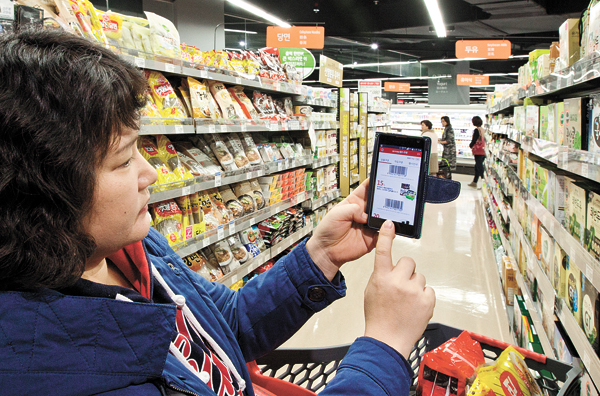 A customer looks at coupons delivered to her phone through the Lotte Mart app on Nov. 4 at the store in Lotte World Mall in Jamsil, southern Seoul, after the app detected the shopper’s location using beacon technology. By Park Sang-moon

With the Korean population’s affinity for new technology, the country is often considered a rich testing ground for understanding how tech developments impacts peoples’ daily lives. And the latest technology Korea is exploring are beacons.

The country’s leading conglomerates have recently jumped on the beacon bandwagon, mulling how to deploy them in alignment with the businesses they offer.

Beacons are a Bluetooth low energy (BLE) technology designed to locate a customer in a store by detecting signals from mobile devices. The range of application is broad, but it is most commonly used to send real-time messages about specials, coupons and loyalty programs to shoppers.

At the forefront of the beacon experiment are Lotte and SK groups. SK Planet, an SK affiliate that specializes in mobile solutions, integrated the Bluetooth technology into its mobile shopping application Syrup in June.

When the app user enters a partner shop of SK, beacons will send the shopper discount coupons for that store.

SK Planet has partnered with more than 200 stores in Myeong-dong, central Seoul and Sinchon in western Seoul, including ABC Mart, Hollys Coffee and A Twosome Place.

SK wants to broaden the appeal of beacons by connecting its businesses with the technology. For example, OK Cashbag, an SK Planet loyalty program in which members can collect and redeem points for rewards, will use beacons to issue more points to members’ mobile devices when they visit stores that have joined with SK.

Beacons are linked with a larger theme in the retail sector: a seamless consumer experience, referred to as omni-channel retailing, which stores want to achieve by eliminating the division between online shopping malls and brick and mortar shops.

A seamless retail strategy is exactly what Lotte Group, the country’s No. 1 retail player, is looking for. Lotte Mart became the first supermarket to adopt beacons last month at its branch in Lotte World Mall in Jamsil, southern Seoul.

When consumers download the Lotte Mart app, they will receive specials and discount coupons when they enter certain sections of the store or approach shelves containing sale items.

The beacon service at the mart, however, is only able to track the “general” vicinity.

When a reporter visited the discount chain to test the beacon-enabled app last week, coupons for products that were three to four aisles away were sent, rather than information only for the items directly in front of the shopper.

But this beacon issue is not unique to Lotte Mart. The system can’t tell exactly how far the device is from a certain product, and its accuracy is low - it works best when the device is within a few meters of the sale item.

Lotte Mart said that to more precisely pinpoint a customer’s location it would have to collect location data.

“Now, it is a one-way signal, so we don’t store any consumer data,” said Park Jae-han, a senior manager at Lotte Mart’s E-Business division.

“But if we are going to offer a more accurate service, collecting specific location data will be inevitable,” he added. “But since there were security issues regarding customers’ data before, the group is cautious in advancing into more sophisticated location detection.”

The security issue was a data leak in which a Korea Credit Bureau employee stole and sold personal information belonging to more than 100 million customers of three major credit card companies - Lotte, NH and KB cards.

The security breach appears to have made Lotte more conservative about pairing beacons with its payment services.

“So far, we don’t have any plan to integrate beacons into our payment system,” Park said.

He added that an average of 100 people per day use a discount they received from the beacon system.

“The number might seem small. But we are now in the second week of the trial, so I think we are off to a good start,” he said. “The vast majority of Koreans now use smartphones, especially women in their 30s, 40s and even 50s. They make up the largest consumer base at discount supermarkets and they are always looking for good bargains. So, I think there is high potential for growth.”

While the use of beacons is largely confined to retail, it has also started to permeate health care and even religious communities.

Domestic company BC Card is in the trial stage of using beacons to serve Chinese tourists. The company sends promotions and information about attractions in Seoul.

At Seoul National University Bundang Hospital in Gyeonggi, visitors can turn to the hospital’s app when they have trouble finding a specific division within the hospital.

The hospitals’ app shows a 3-D map, pinpoints the visitor’s location, and then guides the person to their destination.

At the entrance to the church, visitors’ devices will be connected to the church’s webpage. As they walk past the confessional, information is sent to the visitor regarding time available for confessions. The app has been used by about 600,000 people.

“We thought the app and beacons could provide timely information to believers,” said a representative of the church.