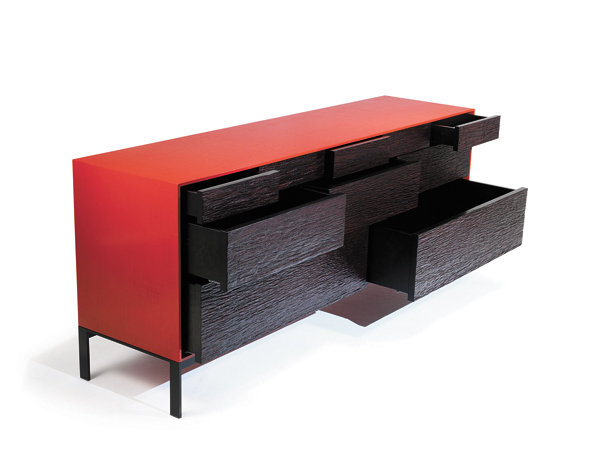 A console by Kim Sang-su. Many lacquerware with mother-of-pearl inlays by contemporary artisans are being featured at the Korea Mother-of-pearl Museum in Yongsan, central Seoul. They included pieces that gained attraction at a recent exhibition in Milan. Provided by the museum

The woman behind Korean trademarks such as the Tromm washing machine, Chum Churum soju and Angelinus coffeehouse is known for turning items into household names, leading them to sell like hotcakes.

But Sohn has now been charged with popularizing Korean lacquerware inlaid with mother-of-pearl, and it remains to be seen whether or not she will be able to work her magic on this traditional artwork.

Last week, Sohn opened the Korea Mother-of-Pearl Art Museum, which she asserts is the first in Korea dedicated solely to locally sourced lacquerware inlaid with the pearl art. The approximately 300-piece collection includes pieces by current artists, as well as relics from the Joseon Dynasty (1392-1910). 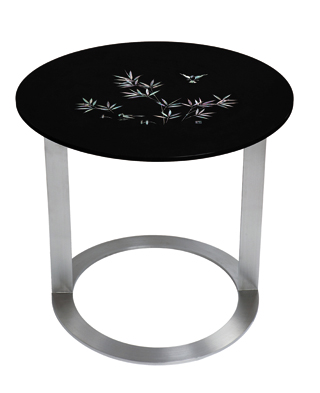 A table by Oh Wang-taek

Sohn emphasizes that her collection took eight years and nearly 6 billion won ($5.62 million) to amass. She opened the museum in a former Crosspoint office building in Yongsan, central Seoul, which overlooks the Han River and is currently nestled amid beautiful autumn colors.

The museum is holding three exhibitions to commemorate its opening. The first presents 55 lacquerware or lacquerware inlaid with mother-of-pearl pieces by 33 traditional artists, including Jeon Sung-kyu (unknown-1940), who is believed to be the Joseon Dynasty’s last lacquerware artisan. A table he created, thought to have originated around 1938, is displayed in the center of the basement exhibition. It is overwhelmingly striking and is one of Sohn’s favorites.

To the left of the table is a dressing table with a mirror by Kim Bong-ryong (1902-94), one of Jeon’s pupils. Born in an artisan family that made gat, or traditional men’s hats, Kim has won many awards in Korea and other countries, such as Japan and France. His creations are considered to have led demand for lacquerware inlaid with mother-of-pearl in 1970s Korea. Kim was designated as Korea’s Important Intangible Cultural Property No. 10, an honor given to a person with special traditional skills.

A chest split into three compartments by Lee Sung-woon, who was under the tutelage of famous Korean painter Lee Jung-seob (1916-56), among other artisans, is another item Sohn has a strong affection for. The piece depicts the sea off Tongyeong, South Gyeongsang, according to Sohn, but what is incredible, she adds, is that Lee used different parts of mother-of-pearl to show how the water and trees glitter in the sun.

“Most traditional Korean chests are symmetrical in displaying drawings or patterns but this one isn’t.” Sohn pointed out.

Lee, who learned his craft from Kim Bong-ryong, is famous for not drawing rough sketches of his designs onto items before putting in the inlays of mother-of-pearl. 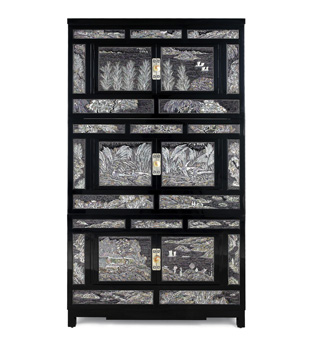 A chest by Lee Sung-woon

Sohn’s first encounter with Korea’s mother-of-pearl lacquerware goes back to 2006 when she was working on a branding project for Tongyeong city. That is when she learned that most of Korea’s contemporary mother-of-pearl lacquerware is exported to Japan and is rarely bought by museums here. As a result, she began purchasing one piece after another, thinking that she would maybe donate them to a museum in the future.

Sohn emphasized that the quality of Korea’s mother-of-pearl lacquerware should never be compromised and added that it is important to appreciate contemporary works by traditional artists and to give them the attention and support they deserve in order to ensure this.

However, in the wake of the Asian financial crisis in 1997, Oh had difficulty making a living. But once his children went to college he was able to come back to making traditional Korean artwork, thanks to strong persuasion from his wife. He won awards in 2009 and 2010, and with the help of Sohn, also presented his works at the Milan International Furniture Fair in Italy last April.

The “Constancy and Change in Korean Traditional Craft 2013” exhibition featured about 50 traditional Korean craftworks by 16 artisans, including Oh. It was supported by Korea’s Culture Ministry and the Korea Craft and Design Foundation (KCDF). Sohn assumed the role of artistic director at the exhibition, which was largely considered a success and was held in several other countries afterwards.


Artisans in the limelight

It’s only natural that the museum’s opening exhibitions include a solo showing of Oh’s work, as well as another display of pieces by Kim Sang-su, an artist whose lacquerware was presented in Milan and gained much attention there.

“The best thing about these works,” Oh says, “is that they last a long time. Once lacquer and mother-of-pearl meet and become an artwork, they last for hundreds of years, sometimes thousands of years, unless something unexpected happen.”

Oh added he really likes the room for creativity he has with his work, explaining that good design is what adds to the “life expectancy” of lacquerware inlaid with mother-of-pearl.

As for Kim, who has been Gangwon’s Intangible Cultural Property No. 12 for 10 years, his exhibition at Sohn’s museum is his first. Those who were amazed by the traditional yet highly modern lacquered console he presented at the Milan exhibition will not be disappointed as it is also being shown at the museum.

Kim said some may think that lacquer is just another painting technique but stresses that it is not.

“Lacquer is a live organism,” he says. “Sap of the lacquer tree is a type of microorganism and once you lacquer something and view it under a microscope, you can actually see particles move. They are alive for some time and the solidifying process of the lacquer lasts for a long time. … The condition varies continuously and at one point, it stops changing.” 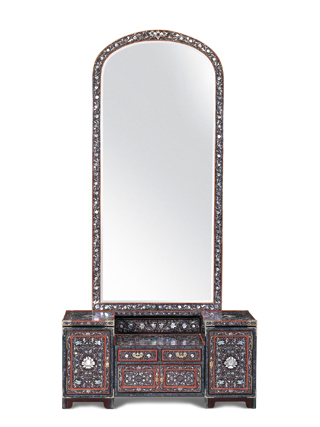 The exhibition of 33 artisans runs until April 19, while the solo shows of Oh and Kim’s work run until Dec. 27. The museum is located near the Yongsan Library in Yongsan District, central Seoul.