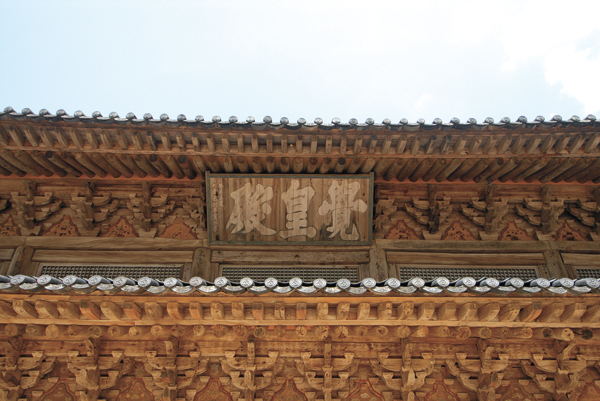 Hwaeomsa Temple, located in the southern foot of Mount Jiri, was built in the Unified Silla Era.

It was a grand temple for Zen Buddhism in the Joseon Dynasty (1392-1910), but was burnt down during the Japanese invasion, known as the Imjin War (1592-98), and reconstructed in the King Injo era.

Although the three-story Jangnyukjeon Hall was originally located in place of Gakhwangjeon Hall and the Avatamsaka Sutra was carved on the wall, both were destroyed during the Japanese Invasion. However, more than 10,000 sculptures remained and were preserved under the Buddhist altar.

The name Gakhwangjeon was given after the reconstructed building in 1702 during the King Sukjong era.

This is a two-story building with seven rooms in the front and five to the side, built above the stone platform made in the Silla Dynasty. The complexly designed pillars supporting the eaves add to its beauty.

Inside the building, there are three Buddhas and four Bodhisattvas.

The structure of the ceiling also displays sophisticated architectural skill. In general, it is considered as an excellent piece of work.