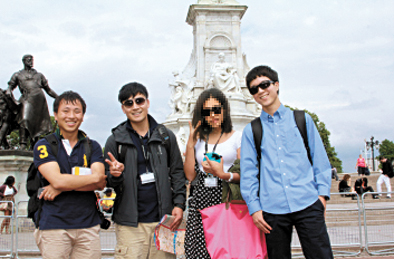 Four English for the Future (EFF) students on their visit to England for a summer course from June 29 to Aug. 22: Lee Geun-hyuck, far left, Serena, second from right, and Lee Jeong-hyeok, far right. Provided by the British Embassy in Seoul

Lee Geun-hyuck was an ordinary student in North Korea. He only knew a few words of English.

“My teacher in North Korea used to say, ‘You need to learn English to know your enemy [the United States],’” he recalls. “I thought that was the only reason to learn the language. It was useless to learn English.”

But when his mother urged him to cross the border and defect in 1998 at the age of 17, he started to reconsider. And when he settled into his new life in South Korea, English became an even greater necessity.

In 2012, when he was working in overseas sales for Kolon Industries, Lee stumbled upon a program called English for the Future (EFF) run by the British Embassy in Seoul.

Since EFF was launched in 2011, the British Embassy has given free English lessons to 134 defectors from North Korea. The embassy has sent 11 outstanding students to England for further study: seven students last year, and four this year.

Lee was one of the students sent to South Thames College in London this year for an English summer program from June 29 to August 22. The trip to England was an aha moment for Lee, especially when he had a chance to meet Hugo Swire, a Minister of State at the Foreign and Commonwealth Office, and two other members of Parliament who wanted to hear the defectors’ stories and discuss human right issues in North Korea.

During the discussion, Swire expressed his interest in introducing a BBC World Service Korean language broadcast for citizens of North Korea to learn about the outside world. He asked advice from the EFF students.

The conversation broke down a wall in Lee’s mind toward Westerners.

“I used to regard the Westerners as our enemies on the Korean Peninsula as I was taught in North Korea, and that concept remained for a long time in my head,” Lee said. “It was shocking for me to realize those officials wanted to hear about our experiences and invest money in a program even though it wasn’t directly related to their own country.”

For Lee, the main reason he began to study English in South Korea was because he met many foreigners working in the area of North Korean human rights. Even when he was in the North, he didn’t pay attention to people who suffered from hunger, never even considering a life spent helping others, he said.

“I was skeptical about their efforts at first, but then felt ashamed, encountering the sincerity of those foreigners working for NGOs to improve human rights in North Korea,” he said.

With his hostility gradually dispelled, Lee now believes that such relatively small efforts by foreigners may be able to influence North Korean society in the long run.

“I believe there is an invisible force behind those efforts to change the North,” he says. “Who else would know about North Korea better than defectors like me? I want to help those foreigners by better explaining the situation in the North. I have found my identity in talking with them.”

Serena, who requested anonymity and the use of a pseudonym to identify her, joined the EFF in 2012 and was among the four who traveled to England this year.

Coming from an area near the North Korea-China border, she wondered what kind of world existed beyond the border. After leaving North Korea in 2007 at the age of 19, she stayed in China and then came to South Korea in 2008.

After finishing high school in South Korea, Serena started to work at the demilitarized zone. That’s when she realized the need to study English. She was meeting foreigners regularly who asked about North Korea.

“I made up my mind to study English to interact with the foreigners who showed interest in me,” she says, “and in frustration over people in the South who were rather cold because I was from North Korea.”

While in England, Serena kept wondering why these foreigners living so far away, even British government officials, seemed to care about North Korea.

“Koreans actually don’t care much about either unification or human rights in the North, which was my impression in the South,” she says. “But they [the foreigners] did.”

Lee Jeong-hyeok, another EFF student sent to England this summer, fled the North with his family in 2003 when he was 13. He said his family concluded that no hope was left in the country because it didn’t have a good family background, which is necessary for a decent life.

As far as he remembers, Lee had two English classes a week during middle school but had no motivation to learn the language. He merely studied to get a good grade to get into a good high school.

When asked what surprised him the most in England, he said “diversity” - so many different types of people living together - along with free museums.

As a communication major at Sogang University, Lee Jeong-hyeok wants to be a documentary producer and keeps studying English to learn about broadcasting in other countries. If he becomes a documentary producer, he said he would like to produce programs that help people understand the cultures of the two Koreas.

“It looks like there are some entertainment programs that try to eliminate a gap between the two countries,” Lee Jeong-hyeok said. “But I would like to produce rather serious documentaries about social unification if the Koreas are unified.”

Lee Guen-hyuck has two dreams. For his career, he wants to study human resources so he can be an advisor to South Korean companies on how to train people from the North.

But ultimately, he dreams of reuniting with the friends he left behind and building a nation where they can live together.

“A community is where I would feel happiness; a community where not only my family, but my friends and relatives would live together,” he says.

Lee said many countries seem to be losing community feelings, and close neighborhood relationships are disappearing.

“When I was there, having a TV was not very common in North Korea, so it was a boring environment if an individual spent their time alone. People tended to share their time with people around them,” he says. “That was the driving force of their happiness amid poverty.”

Serena didn’t think about a dream when she was in the North, aside from getting married and having children.

“But I came to South Korea and people kept asking me, ‘What is your dream?’” she says.

Now she wants to be an interpreter of Chinese, English and Korean to prepare for reunification.

“I want to play a concrete role in society if the Koreas unify someday,” she says. “I have experienced these countries - the two Koreas, China and Britain - and I believe I will be an ace interpreter of these languages.”